The great Sir Alex Ferguson famously said that attack wins you games but defense wins you titles. A solid defense is the foundation of any great team. We have seen the importance of this in recent years. Liverpool went from contenders to winners only after signing Virgil van Dijk to lead their defense.

The big clubs realize the importance of having a solid foundation, which has seen big money being spent on defenders. Manchester United broke the transfer record for a defender when they signed Harry Maguire last summer to fix their defense.

Defenders usually get better with age and experience. They are prone to making mistakes early in their career and don't hit their peak until they're in their mid-20s. Being a young defender is not easy, as even a little mistake can prove harmful to the team's prospects. As a result, we rarely see young defenders get opportunities at big clubs.

The modern game requires defenders to be comfortable with the ball and they should also have the ability to make passes all over the field. There are some defenders who become world-class at a young age and become key members of their teams. These players perform at a high level regularly, while handling the pressure.

Let's take a look at the top 5 most valuable defenders in the U-23 age group right now. The 21-year-old possesses qualities that make him a complete centre-back. The defender combines his formidable frame with amazing acceleration and speed across the ground. He uses his physical strength to muscle attackers off the ball and his pace helps him recover.

Upamecano has all the tools to go a long way in the game, however, there are still some elements in his game that can be improved upon. He is still very young and the mistakes will disappear with more experience. It won't be surprising if he ends up at one of the biggest clubs in the world in the near future. Achraf Hakimi is another player who has made a name for himself in the Bundesliga. The youngster has established himself as one of the most exciting full-backs in the game over his two-year stay at Borussia Dortmund on loan from Real Madrid.

The Moroccan international is a modern-day full-back who contributes at both ends of the pitch. He is especially adept at joining the attack and creating chances for his team-mates. He has electric pace, good ball control, and excellent crossing ability which sees him get plenty of assists.

The 21-year-old is also very versatile. He can play on either side and also on the wing. The youngster has grown tremendously over the last two years, and his performances have made him a two-time African Youth Player of the Year.

The former Real Madrid player has signed for Inter Milan for the next five years. This move can see him establish himself further. He will play as the right-wing-back in Antonio Conte's system, which should suit his strengths perfectly.

The future is bright for Hakimi and his value should increase more in the next few years. Bayern Munich had another successful year this season. They won the Bundesliga comfortably and are amongst the favorites to win the Champions League. However, the biggest success story of their season may end up being the emergence of Alphonso Davies.

Davies signed for the club in January 2019 but struggled to make an impact initially. The injuries to first-choice central defenders Niklas Süle and Lucas Hernandez meant that David Alaba had to play as a centre-back. This gave the Canadian youngster his opportunity as a left-back.

The highly-rated teenager grasped this opportunity and has not looked back since. He has been one of the stand-out performers for Bayern this season. The youngster has the pace to match any winger, and his experience playing as a winger helps him contribute in attack.

The 19-year-old caught the eye of the whole world when he put in an amazing performance in the Champions League against Chelsea. He is already counted amongst the best left-backs in the world, and his potential means that the sky is the limit for this talented player. Matthijs de Ligt joined Juventus in the summer with a huge reputation after leading Ajax to the Champions League semi-final. The centre-back was tracked by nearly every big club but the Turin side won the race for his signature.

The Dutchman's huge transfer fee put the pressure on him to perform straight away. However, his career in Italy started on a bad note. The centre-back faced criticism for his performances as he struggled to adapt to new surroundings.

The former Ajax captain soon found himself on the bench as Merih Demiral took his place in the side. This would have broken any youngster's confidence, but De Ligt is a different beast. He fought his way back into the side and has become a leader in defense for Juventus.

The centre-back is back to his best and has proved his detractors wrong. This is good news for the Old Lady as they expect De Ligt to lead their defense once the old guard steps away. The futures of the Juventus and Dutch defenses are in good hands. 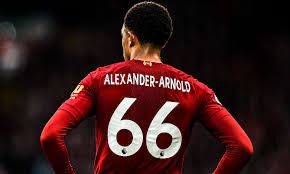 The name on the top of this list should not be a surprise. Trent Alexander-Arnold is already one of the best footballers in the world.

The youngster is redefining the role of a full-back with his performances. He is quick, good with the ball, and one of the best crossers in the game already. The England international is also dangerous from free-kicks, and quality on the ball has drawn comparisons with David Beckham.

The 21-year-old is already an indispensable member of Liverpool's squad. The Reds depend a lot on his ability to pick a pass for their attacking moves. The full-back is placed second on the list of most assists in the league this season, with 12 assists to his credit.

Alexander-Arnold is a generational talent who is on his way to becoming a footballing legend.