Opinion: What Tuchel should learn from the defeat to Juventus

By Michphil (self media writer) | 2 months ago

Chelsea football club suffered a defeat at Turin in their match day 2 against Juventus football club of Italy. It is all thanks to the brilliant striker of Federico Chiesa who decisively slotted the ball past Chelsea's helpless Mendy to give the old lady a win in front of their home fans.

Chelsea were in full possession and control of the match but had a very poor finishing as they recorded only one shot in a game of 90+ minutes, and that when carefully scaled, is a very disappointing performance.

Tuchel should learn these 2 lessons from the game against Juventus:

1. Tuchel should learn never to partner sluggish wingers with a strikers with great pace: The Chelsea wingers Ziyech and Havertz are two sluggish players who cannot be able to meet up with the pace of Romelu Lukaku in the upfront position. Because Romelu Lukaku's pace and speed outweighs those of Ziyech and Havertz. That was why the duo wingers were unable to always meet up with him as he was always some meters ahead of them during a counter attack or break.

2. Never to select one-footed attackers in his front-lineup again in any match: The front-line of Tuchel on their game against Juventus were all left-footed, that was why they were unable to make much impact as the Juventus' defenders breached their left-foot connection with each other. The Juventus' defenders were wise enough to trade their tackles on the left-foot side of Chelsea's attackers and in so doing blocked their mood of operation and connections with each other. 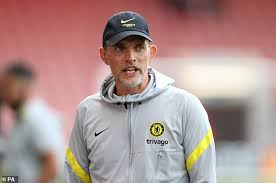