How Did Manchester United End Up Not Winning A Penalty After Two Rough Tackles By West Ham Players?

Manchester United has been denied some obvious penalty fouls in the box this season. Against Newcastle United, Ole fumes over how the referee overlooked some mishandling of the United players inside the box.

The continuous denial of clear penalties incident was in action again yesterday when the Red Devils were at Hammers park. Martin Atkinson the referee appears to be controversial in today's game. Two obvious penalty situation that was flagged off as a no penalty.

This was the first penalty call that was an undeniable foul on Cristiano Ronaldo in the 6 yards box. A step over from the Portuguese Captain, pushed the ball forward a little bit and Coufal stopped the movement with his legs. 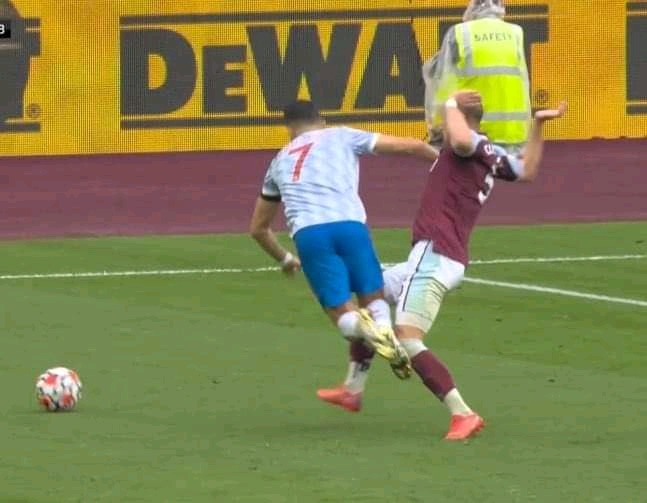 If you look closer at the picture above, you would see that Coufal had to intention to get the ball. He intended to stop Ronaldo on track. We have to ask ourselves if the contact rule is still alive and working. That wasn't just a touch contact, a leg tackle foul that has been overlooked by the referee. To be honest, Martin didn't even take the VAR review to witness what really went down there.

Zouma was having a great game until he made this challenging tackle on Ronaldo. Of course, that was also supposed to be a penalty for United. It's so shocking to see a player kicking a 36 years old man with his right leg and you expect him not to fall. 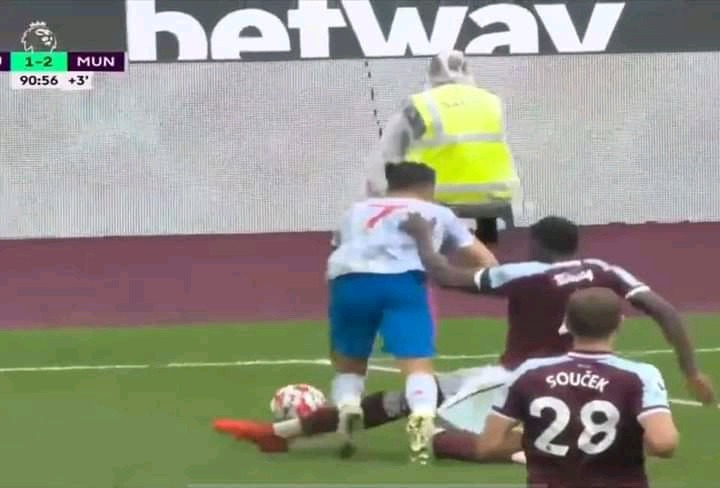 There was a touch here, and it's not a minor contact. Just as Coufal, Zouma didn't go for the ball as well. A sliding tackle without getting the ball is a definite foul. There shouldn't be any argument on that. I guess Martin has already made up his mind about not giving United any penalty in yesterday's game.

Five games without a penalty for Manchester United is nothing to be worried about but in a game where the opponents are hurling their legs the way they like inside the box is Questionable. Could this be a plot against the Red Devils? How did they not get a single penalty today after those rough tackles inside the box by Hammers players?