While the world may be talking about NXT TakeOver and even what happened with Roman Reigns and Jey Uso at the end of WWE SmackDown this past week, another significant recent development just seemed to fly under the radar.

To the surprise of many, King Corbin teamed up with Steve Cutler and Wesley Blake from The Forgotten Sons on WWE SmackDown, to form a faction of sorts this week.

Many members of the WWE Universe want to know is why this oddball faction was formed. We have the answer for you right here. Be sure to leave a comment about this brand new WWE SmackDown alliance and whether you are for or against it. 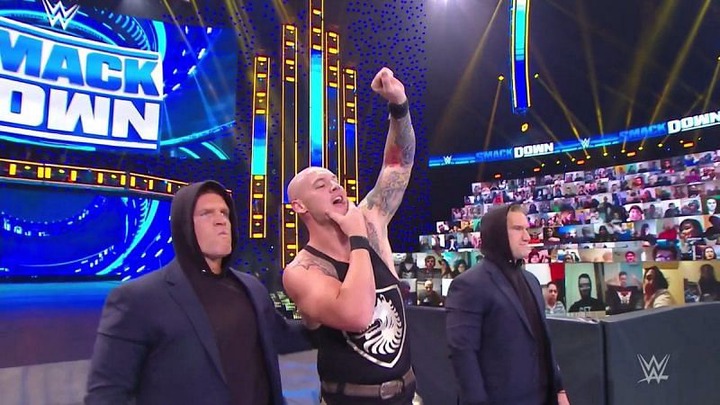 At SK Wrestling, we stay out of political commentary, so let's just say that  Jaxson Ryker  had posted a Tweet about Donald Trump that ruffled a lot of feathers. And since then, The Forgotten Sons, who came to the WWE SmackDown roster with much momentum, have remained forgotten. It does seem, according to a  report on Fightful Select , that the heat is still as strong as it once was.

As if Friday wasn't indication enough, there's still heat on Jaxson Ryker within WWE. As we mentioned recently, Ryker had been home in North Carolina and hadn't been brought to Orlando to the site of WWE tapings in months. At one point, Ryker wasn't even featured on internal WWE roster sheets.

Plus, this new gimmick on WWE SmackDown seems like a major step up from their original characters, does it not?We are glad to report that the collateral damage suffered by Cutler and Blake as a result of what happened to Jaxson Ryker has been long forgotten, like their erstwhile gimmick.

2 The history between WWE SmackDown stars Blake and Murphy

Many fanse may remember  Murphy  as Seth Rollins' disciple on RAW and WWE SmackDown, and later Aalyah Mysterio's boyfriend. But do not forget that Blake and Murphy were quite the unit when they were a part of the  NXT  roster.

Long before Blake and Murphy arrived on the WWE SmackDown roster and Alexa Bliss became entranced by The Fiend, the trio used to be a force to be reckoned with on NXT.

And now, WWE has the chance to explore this history between Blake and Murphy. Murphy's potential feud with King Corbin could lead to a program with the former partners. Their time in NXT can be touched upon, and it could be a very interesting storytelling device on the WWE SmackDown brand. Murphy could even call on Dominik Mysterio as a new tag team partner against King Corbin's allies.

We also know that Blake can go in the ring. So could we potentially see Wesley Blake throw it down with Murphy when the time is right in a massive, personal, singles matchon WWE SmackDown?

Sure, the WWE SmackDown Tag Team Champions,  The Street Profits  are incredible in the ring. However, a champion is only as strong as his/her challengers. As we have seen on both WWE SmackDown and RAW, the tag team division is often an afterthought.

The Street Profits can potentially mix it up with Bobby Roode and Dolph Ziggler for the WWE SmackDown Tag Team Championships. They can also have great matches with Cesaro and Shinsuke Nakamura. (They already have.) But there will come a point when they run out of heel teams to face. Here, this new version of The Forgotten Sons comes into play.

To have Cutler and Blake get benched as a result of Jaxson Ryker's actions would have been unfair to these two talented young men. They, too, could have great matches against The Street Profits at some point in the future. King Corbin giving his boys the unfair advantage completes this recipe for a pretty good tag team title feud on WWE SmackDown.