Who Would Be In Your Premier League Greatest 11?

By Resourceful (self media writer) | 10 days ago

I'm assuming that the team being requested is of the PL era (post-1992) and not the 1st division of English football of all time and I've also assumed that all these players are in their prime since not all of them are contemporary to each other.

However, since we're talking about the all-time PL XI, I'll opt for the classic 4–4–2 formation in favor of the fancy formations or 3–4–3 which has become very popular lately. My Premier League all-time XI would look like this 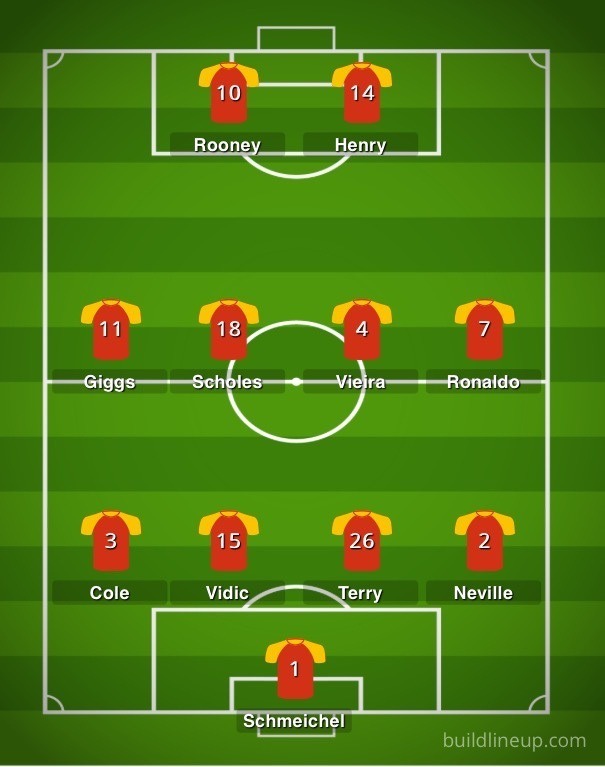 I was spoilt for choice in this department because some of the greatest shot-stoppers have graced the PL be it Van Der Sar or Cech or De Gea recently. But I'll opt for the Great Dane because not only did he have great reflexes and shot-stopping abilities but he also commanded his area extremely well.

LB: Ashley Cole, because at his prime, very few were better than him and certainly one of the greatest LB of the PL era.

In his prime, Vidic was the best Centre Back in the world, an absolute nightmare for any attacker.

Very much like Vidic, Terry would throw himself entirely against the ball while defending, a kind of player who'd die for his team if needed.

Certainly not the most elegant player to watch but the most passionate in the Premier League and we haven't seen a lot of Right Backs having long careers in the league.

Neville was an exception, a classic case of Hard Work trumping natural abilities.

Ryan Giggs: The most decorated player in the History of the Premier League with 34 major honors including 13 PL medals. Any all-time PL XI would be incomplete without him.

Patrick Vieira: Since I don't have a defender with good passing abilities in my team, I need to have a box-to-box midfielder who can run like an engine and allow the team to play from the back while also shielding the back 4, I'll opt for Vieira.

Paul Scholes: Arguably, the most complete midfielder to have ever played in Premier League.

Scholes is the perfect playmaker with a sledgehammer of a right foot as the only ammunition missing from his arsenal was the art of tackling but other than that, he had it all.

Cristiano Ronaldo: Another tough call. For the right-wing as it would be really difficult to leave out David Beckham, the man with the sweetest right foot in football and of course the setpiece king. I'm opting for CR7 because of his exceptional dribbling skills and lightning-fast pace, a very important trait needed in the league, and of course his knack for scoring a goal out of nowhere.

I've opted for an out-and-out striker, a number 9 with a Centre Forward, a number 10 playing in the hole.

Thierry Henry: The Arsenal talisman was the most feared striker and could turn any game on its head as It's been more than a decade since he left the gunners, and Arsenal has struggled since then because he is simply irreplaceable.

Wayne Rooney: Ever since an 18-year-old Rooney scored a Champions UCL hat-trick on his debut against Fenerbahce and announced himself to the World, he hasn't looked back.

Sir Alex Ferguson could manage this team, with every player in his prime, would decimate any, just about any opposition.