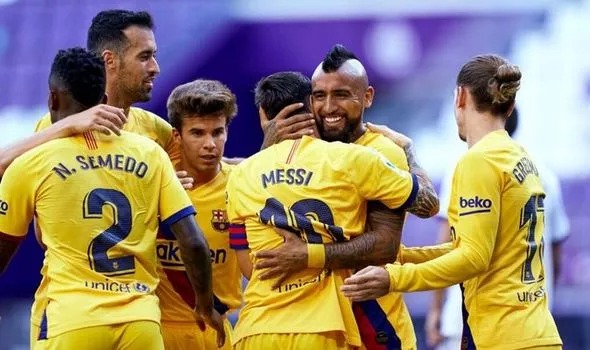 Barcelona midfielder Arturo Vidal has been touted as a potential replacement for Jorginho at Chelsea this summer.

Arturo Vidal can be the perfect player for Chelsea as they look for a replacement for their midfielder Jorginho, according to Fox sports journalist cristian Martins.

Rumours has been going on that the midfielder wants to leave Barcelona this season and that he might be heading to Chelsea as Frank Lampard looks to strengthen his team.

Chelsea have already sign two top players for next season, Hakim Ziyech and Tomorrow Werner From Ajax and RB Leipzig.

And they didn't stop there they also kept on going for Ben Chilwell and Kai Havertz and also want a central Defender and a new goalkeeper.

The blues has a well talented midfielders n the team already and it's unlikely that Frank Lampard would want to spend huge amount of money signing any more midfielder, especially for a 33-year old Arturo Vidal.

At Chelsea, Arturo it would be a perfect fit, hopefully it will happen, his football would fit in well, we’ll talk to [Vidal's agent] Fernando Felicevich later, it would be good.” He has played very well in Italy, I don't know what stopped him from joining Inter Milan when he wanted to leave Juventus but I believe they will like to come and try out Premier League.

Vidal has been enjoying his time in Barcelona for this past two season like he has enjoyed during his time at Bayern Munich, Juventus and Bayern Leverkusen

The Chilean is vastly experienced, racking up 115 senior caps for his country, and has the versatility to play in a number of different positions.

Vidal is considered surplus to requirements by Barca coach Quique Setien this summer, although he has still made 40 appearances in all competitions this term.

The La Liga Giants are hoping to boost up their transfer fund and make arrangements for their wage bill in order to bring in Inter Milan striker Lautaro Martinez.

Because of his age and his contract that will expire in 2021 Vidal may have a low market value but Inter are seeking for his services and this pairing for Chelsea.

The truth is that Jorginho have not yet given out the best that was required from him, and I don't know for Vidal it will look like a new challenge for him but he's not afraid to take up the challenge.