A Review Of Enyimba FC's First Six Games Of The Season

Enyimba FC is a top Football Club in Nigeria and Africa, and has always been blessed by good players, Managers and administrators.

Here are what I have discovered of the team in the last couple of games.

In life it pays to sometimes take inventory of whatever is going on in a sector.

Enyimba FC's first game of the season was a CAF Champions league fixture Against Rahimo FC of Burkina Faso away in Ouagadougou.

From the clips I saw of the game, Enyimba enjoyed possessions and created couple of chances but didn't score until the 76th minutes of the game when a corner kick from Anayo Iwuala was headed home by Victor Mbaoma. And Enyimba comfortably protected the lead till the end of the game.

The second game of the season was the return fixture of the game against Rahimo FC, Enyimba dominated play and Austin Oladapo managed to score a wonderful volley in the early minutes of the first half. Deep into the second second half Rahimo FC took control of the game and subsequently got a goal.

The game had to end a nervy fashion for the People's Elephants.

The third game was against El Merrikh SC of Sudan, Played in Far away Ondurman.

Enyimba FC dominated play as usual playing a tip tap partern reminiscent of the Barcelona FC team, but the Sudanese team were deadly with their counter attacks, counter attacks that the Enyimba team found difficult to control and it led to the three goals conceeded, all through one man Said Terry.

The fourth game of the season was a league fixture Against local rivals Abia Warriors.

Elephants dominated play as usual but found it difficult to break down the Warriors defense and in few cases the managed to break the defense the wasted their chances. The People's Elephants managed to get a goal through a penalty Kick converted by Debutant Samad Kadiri.

The fifth game of the season was a return fixture of the El Merrikh game in Aba.

The Enyimba team started like a house on fire, but it was the El Merrikh SC side that looked more dangarous, the managed to create two chances via counter attacks and the second attack led to the opening goal & it was scored by Said Terry.

Enyimba FC took control of the game and equalised when a corner kick was crossed into the El Merrikh box and the ball was shot straight to the goalkeeper, who managed to spill it and Enyimba striker Victor Mbaoma pounced on the rebound to Enyimba FC's first goal of the day. The second half saw Enyimba totally dominate their opponent all through the second half, but lacked the edge to get the much needed goals, in the 50th minutes Victor Mbaoma converted a penalty to give the People's Elephants a lifeline but that was all the game could produce.

The Sixth game was a home league fixture Against Wikki Tourist of Bauchi, a game played almost in the same fashion as the previous league fixture, Enyimba FC dominated play all through the first half and deservedly got a goal in the 15th minutes when Nabib Yarou Heads home from a corner kick which was crossed in from the Stanley Okorom. The second half was more of a ding dong affair with both sides creating chances, but no further goals came. It ended 1-0 in favour of Enyimba FC.

Of all the previous six games Enyimba scored 6 goals, 5 of the 6 goals were through a set piece situation only the goal Against Rahimo FC in Aba Scored by the Skipper of the Side Austin Oladapo was a non set piece enabled goal.

Enyimba FC Conceded 5 goals, 4 of which came through counter attacks (apart from the Rahimo goal in Aba).

With the above statistics it's obvious that the technical team of Enyimba have a lot of job to do. The team needs to be clinical in front of goal, the midfield is not doing badly but the strikers needs to strike accurately.

The defense needs to learn how to deal with counter attacks, because it seems that's the weakest link.

The coaches needs to manage the players well so that every player will feel like a through member of the team.

If the above is put into consideration and properly executed, then reason why Enyimba won't do well this season. 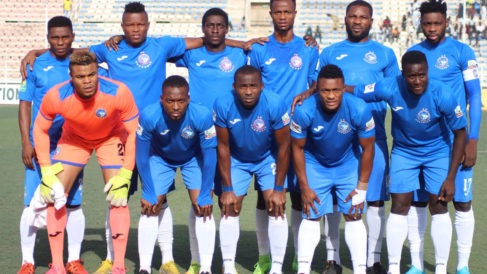