Liverpool’s Mo Salah has started the 2021/22 season in fine form, his goal against Manchester City in the thrilling 2-2 draw at Anfield was a snapshot of what all football fans know that he’s capable of.

Since joining The Reds in the summer of 2017, the Egyptian international has been nothing short of a goal-scoring revelation. In his four seasons to date, he’s won the Golden Boot twice and been amongst the top five scorers in his two other campaigns. It’s quite the record in front of goal.

But across the squads in the Premier League, there are a number of players who will all be pushing Salah for the accolade of Golden Boot winner this season,

Here We Take A Look At The Golden Boot Contenders

West Ham’s determined and pacey frontman is someone who previously hasn’t been thought of as one of the Premier League’s hottest strikers, however this season Antonio is really upsetting the usual suspects.

David Moyes has managed to mould the former winger into a striker of true quality and it could be argued that if he was at a bigger club he’d be talked about more favourably.

He’s now The Hammer’s all-time record Premier League goalscorer and if his and West Ham form continues, he could well find himself with the Golden Boot to add to his recent accolade.

The EPL odds on Coral currently have Vardy among the favourites to finish as top goalscorer this season. The diminutive Leicester City forward is a name synonymous with goals.

His meteoric rise from Non-League football to Premier League winner has seen Vardy score goals in every division he’s played in. He’s no stranger to the Golden Boot either, as he picked up the honour of being the top scorer in the EPL just a couple of seasons ago.

Vardy still possesses lightning pace and certainly isn’t losing his predatory instincts in front of goal at the age of 34. He’s certainly one player who could again take the Golden Boot.

Manchester United’s Portuguese attacking midfielder Bruno Fernandes is one player who surprised a few with his 18 goals in 39 appearances last season, making him one of the highest-scoring midfielders in Europe.

The 27-year-old’s shoot on sight attitude aligned with his prowess from the penalty spot makes him an outside shot for the Golden Boot, as he’s started this campaign in similar fashion racing to four goals already this season.

Romelu Lukaku of Chelsea celebrates his goal in action during the Premier League match between Arsenal and Chelsea at Emirates Stadium on August 22, 2021 in London, England. (Photo by Michael Regan/Getty Images)

The imposing Belgian has had a very quick start to his second spell at Stamford Bridge as he’s proving to be the real spearhead to Chelsea’s attacking threat.

Lukaku’s scoring record over his career is nothing short of impressive both at club and international level, with over 250 goals for club and almost 70 for his country to date. That form has continued since returning to the Blues from Inter in August as he has managed to score in every other game he’s played.

It’s a strike rate that has almost run throughout his astonishing career so far and it all signals towards another high scoring season this time out. 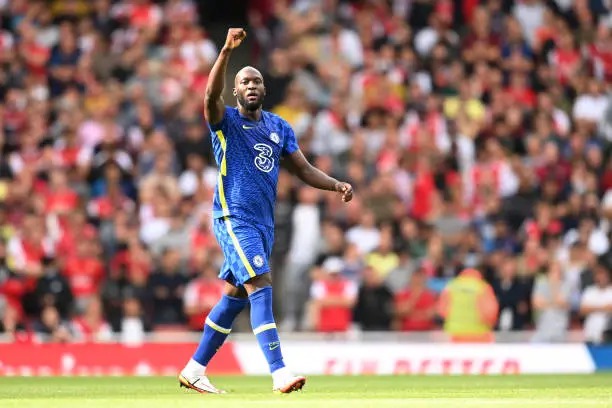 Ask anyone who is a modern goalscoring great in the game of football and it won’t get more than a couple of responses before someone mentions the name of Cristiano Ronaldo.

The five-time Ballon d’Or winner made his much-heralded move back to Manchester United in late August and made an instant impact on Ole Gunnar Solskjaer’s side. Ronaldo bagged a brace in his second ‘debut’ appearance for United against Newcastle United and that goalscoring form has continued in the EPL and in European competition so far.

While Ronaldo does have one EPL Golden Boot from 2007/08 on his long list of achievements, he will be certainly doing all he can to make it a pair come May 2022.