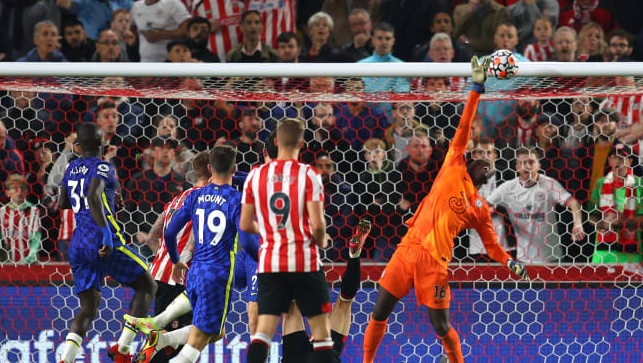 If beating Arsenal on the opening day of the season was not enough warning, Brentford certainly sent a very big warning in their 3-3 draw with Liverpool last month. Chelsea experienced first-hand how difficult Brentford can be, especially in their stadium, as the Bees came with a game plan and executed it well on Saturday.

Brentford manager, Thomas Frank prefers the 3-5-2 or the 5-3-2 formation. The extra defenders and midfielders make his team very difficult to score against. So far this season, only Liverpool have been able to score more than one goal against Brentford in a single Premier League game.

Brentford's defensive solidity, which involves having as many bodies as possible in and around the box, gives them a good foundation as a team.

Having so many defensive minded players in the starting lineup should, theoretically, reduce Brentford's attacking impetus. However, the reverse has been the case so far. Apart from Chelsea, only Crystal Palace and Brighton have been able to prevent the Bees from scoring in the EPL this season, with Liverpool and Arsenal conceding a combined total of 5 goals against them.

Thomas Frank has, incredibly, been able to find an attacking system that can yield goals with less attacking players and it is all about doing one thing over and over again.

Brentford's greatest threat on the attack is in their aerial ability. Thomas Frank knows this and he has worked on perfecting the art of winning headers in the opposition box. At least 8 of Brentford's 10 goals this season have come from long throws, long balls, set pieces or crosses. 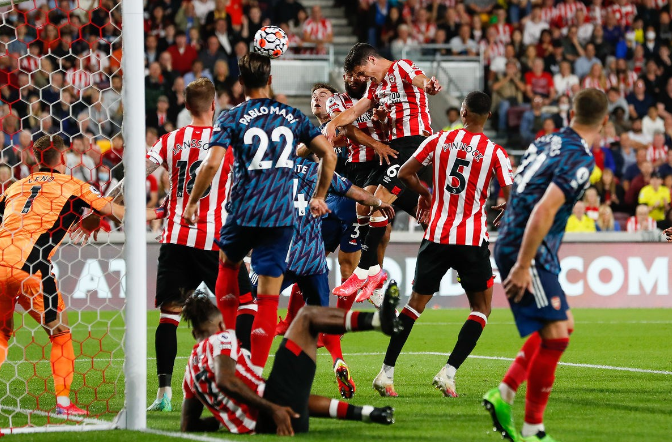 Rarely do Brentford try to play through their opponents and they actually have little need to do so as they have big men in the attack (Ivan Toney and Bryan Mbeumo) who are supported by big, strong midfielders.

Buoyed by their home fans, the Bees just kept launching crosses into the Chelsea penalty area as they chased the equaliser. This resulted in a massive 17 shots on goal (7 on target) against the blues despite having the lower ball possession. Chelsea had to make as many as 41 clearances in the game.

Brentford's usual tactics is to send crosses to the opposition far post where two or three are waiting to win the header. More often that not, when they win the header at the far post, the player who wins the ball tries to head it back across the goal. A header coming to the centre from the far post is a nightmare for defenders to deal with as the ball could land anywhere.

The first goal Arsenal conceded on the opening day of the season against the Bees began from a header won at the edge of the box. Liverpool conceded two goals against them from crosses towards the far post. The same technique cut Chelsea open severally but the blues had goalkeeper Edouard Mendy to thank for saving potential goals.

Rarely do Brentford score with direct headers from a set piece situations or crosses. The technique is almost always to win the header in or around the box and head it across the middle of the pitch where there are bodies waiting to pick up the scraps. 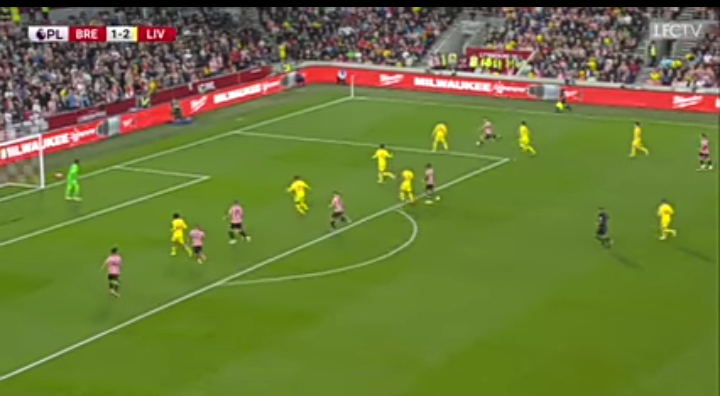 **A Brentford player (red and black) with the ball on the right hand side of the Liverpool (yellow) box about to send in a cross. Notice 4 Brentford defenders already in the box and 1 at the edge of the box 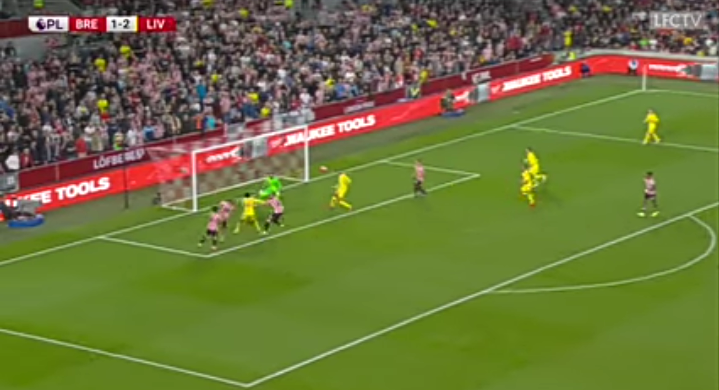 **Notice 3 Brentford players (red) at the far post (far left) against one Liverpool defender (yellow) waiting to head the ball back across, resulting to a goal 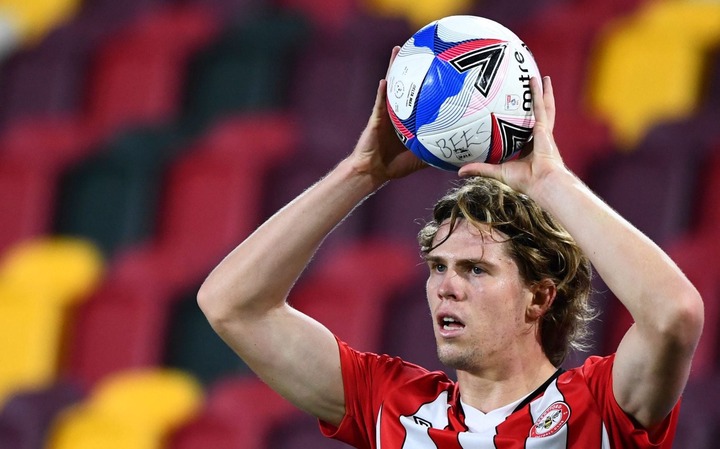 With tactics like this, it's very difficult for opponents to prepare against Brentford. The Bees do not like to keep the ball on the ground when attacking and as long as the ball is in the air, that is their territory.

Thomas Tuchel, perhaps, knew this and that coud be why he chose to give a PL debut to the big Malang Sarr as the injured Antonio Rüdiger's replacement, despite his inexperience. He moved the smaller but experienced César Azpilicueta to the right wing back position and chose to play a three-man midfield against his usual two.

To defend against Brentford's long ball tactics, one needs big, strong and experienced defenders who can cope well with the pressure. With Antonio Rüdiger and Thiago Silva, Chelsea would likely have coped better against the Bees but ultimately, the home side would have won more of the aerial battles as they have mastered the art already.

Brentford have been denied 7 times by the post already this season but their luck will get better eventually. As long as they can manage to keep the ball in the air in every game, they will be difficult to play against. Try playing the aerial game with Brentford at your own peril.