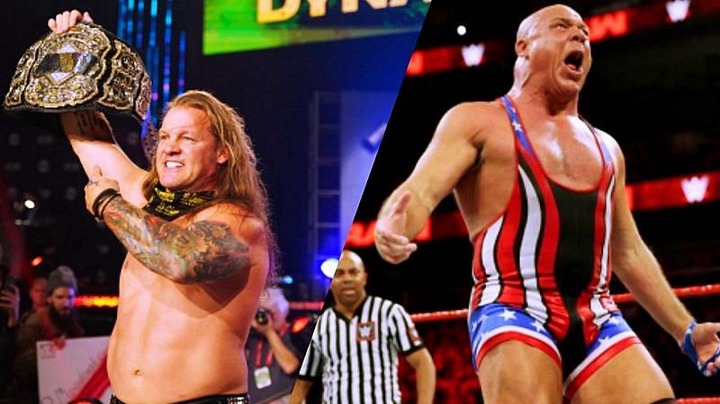 The former WWE Champion and current AEW wrestler tagged the Olympic Gold medallist in a post celebrating his son Ash's victory in a wrestling competition.

Chris Jericho was clearly paying Kurt Angle the ultimate compliment with the post. Angle, who was a legitimate Olympic athlete as well as a WWE superstar, was one of the most respected wrestlers in the Unites States after his iconic 1996 Olympic victory in Atlanta, Georgia.

As his famous catchphrase tells us, Angle won the Gold medal with a "broken freakin neck" when he fought through excrutiating pain, and two fractured cervical vertabrae, to finally lift the top prize in the sport.

While it's not out of the realm of possibility that Chris Jericho's son Ash could go on to have a career in pro wrestling, as many more sons of wrestlers have done over the decades, it's likely Jericho tagged the WWE Hall of Famer in jest.

Kurt Angle was advertised to appear at the recent WWE RAW Legends Night event, where various legends from WWE's past gathered to be recognised and celebrated on Monday Night RAW. However, Angle would end up becoming one of the several advertised names who did not appear on the episode.

Angle recently revealed on a fan Q & A session on his official Facebook page that he was unable to attend RAW Legends Night due to "prior engagements", despite WWE using his name in promotional material for the event.

Currently, Kurt Angle is focused on his own brand of protein snacks, titled 'Chxn Snx'. In another Jericho-related post, the 'Demo God' was recently featured on Angle's Instagram promoting the product. You can check it out below.