Liverpool have been seriously hit with lots of injuries during this season. The Reds cruise to the Premier League title last season as the finished with 99 points. 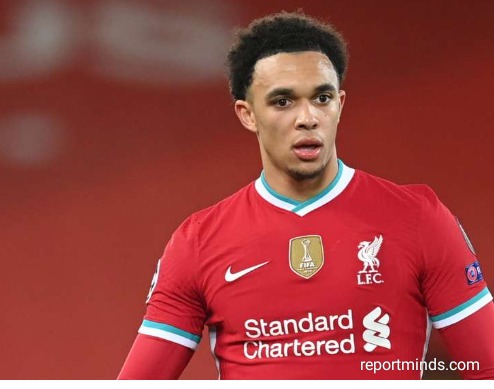 But their title defense has been hindered with some injuries to the keep players on the team.

Although, Jurgen Klopp has been able to manage these crisis with some young talents like Neco Williams and Curtis Jones has been called upon in several games.

Liverpool return to the Premier League this weekend to host Wolverhampton at the Anfield stadium.

Recall that the Reds were held to a score draw against Brighton Hove Albion at the AMEX Stadium last weekend.

Liverpool might have their full back, Trent Alexander-Arnold back in the team this weekend.

It's been gathered that the English full back who had the second highest assist last season feature against Wolves.

If you recall that Alexander-Arnold has been sidelined since picking up a knock in a 1-1 draw at Manchester City on November 8 2020.

The manager also stated that Naby Keita could also face a late fitness test despite struggling with a hamstring problem.

Klopp said: “Trent and Naby will do the first steps in team training today [Friday]; whatever we can do with that depends on how it looks.There are some niggles after the game against Ajax and we have to see how they respond.

“So far, they didn’t do a lot apart from treatment and stuff like this. We have to see how that develops [but] I don’t know in the moment.

“There is a chance Naby and Trent can be in the squad, I would say."

Liverpool have likes of Alisson, Joe Gomez, Virgil van Dijk, James Milner and Thiago Alcantara remain on the sidelines and the manager revealed that none of these players are near to come back.

“Apart from Naby and Trent, nobody is coming back, no.”

Former Arsenal Star, Alex Oxlade-Chamberlain has been long-term absentee from the team. He's yet to feature in any game for Liverpool after he picked up an injury during the pre season in Austria.

The former Borussia Dortmund boss went ahead to give the midfielder fitness stating that he's recovery very well.

Klopp said: “Ox looks really promising, he is doing a lot of stuff. He is warming up with the team now, some ball work, a lot of stuff, but we will develop that now over the next few days.

“Then we will see from which moment on it makes sense to throw him in. He is not too far away.”