Solskjaer said in his statement after the Everton game that he does not regret not starting Ronaldo and it was a right decision. These are the two reasons why Solskjaer made such a statement. 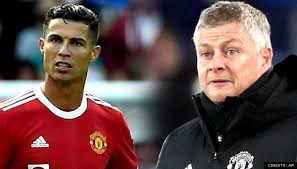 1. He is trying to manage Ronaldo's playing time: He is 36 years old and he cannot play all the games of the season. He came into the game in the second half but failed to make a single shot on target as he was dispossessed. However, Ronaldo is fit and wants to play all the games and help the club win a tangible trophy this season. Manchester United has only gained 1 point in two games at Old Trafford, and this looks bad for them. Ronaldo might be regretting why he joined a club like this. He wants to win all games.

2. He doesn't want Ronaldo to get injured: Over the years, he has suffered from a knee injury, and the manager needs to be careful because he is the most influential player in the squad, Ronaldo has scored 5 goals since he returned to the club. He saved Manchester United against Villarreal by scoring a winner in the 95th minute. Solskjaer has blamed Manchester United's draw on mistakes committed by his players.

The club has conceded a lot of goals this season and the struggle against smaller teams should be looked into. This October might be a title decider for the club as they will face Liverpool, who have been in good form. The manager needs to start Ronaldo in the next game, try and play a 4-4-2 formation to see what will be the outcome. Ronaldo left the pitch in anger. That must have sent a good message to the owner of the club.

The Glazers might surprise the fans by sacking Ole and bringing another manager to the club. Manchester United does not look like a team that can win any silverware this season, but they have one of the best squads in Europe.