What fans are saying about Wilfred Zaha after Manchester United game 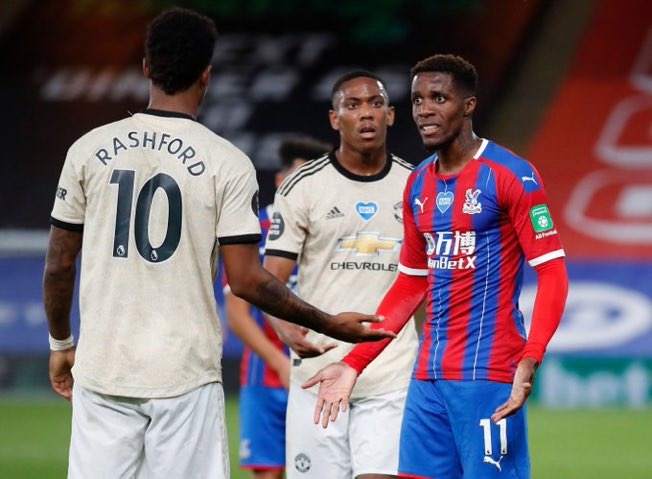 Of course Palace don't get their deserved penalty after a foul on Zaha and then United go up the other end and score.

You're delusional if you think United aren't the luckiest club in the league.

If that foul on Zaha was Bruno Fernandes, it would have been a Penalty. 🚶🏽🚶🏽

At this point, there really is nothing left to say about VAR.

A clear penalty on Zaha doesn’t even get reviewed and United score right after. Yet a milimiter offside for Palace’s goal (right call, don’t get us wrong) gets a thorough look.

Just get rid of it all together.

Want to make it clear that the issue isn’t VAR, it’s the incompetent clowns in charge of it all over the world.

Such is the incompetence of some that not even technology can help them. Any other job in the world, you get fired but in football, poor refereeing is rewarded.

VAR is a terrific solution, but as stated 100 times, its implementation has been horrible.

VAR, like goal line technology, should be as close to faultless as possible but it’s far from that. Until the FAs can fix their incompetence, why even use it? That’s the point.

Lindelof with the foot on the ball before the foot on Zaha. Looks like a pen in full-speed but an excellent decision by the ref and VAR folk. #mufc

So they didn't check VAR for the Zaha foul in the box but they straight away checked the Ayew offside.

VAR is a joke.

So it's now ok to tackle a player by picking him up by the leg #zaha and then give a free kick to the culprit. #Rashford

Bro @Dyvvne, thanks for always letting me know Wilfred Zaha was an average block who doesn't deserve to play for Chelsea.