By Martsyl (self media writer) | 1 month ago

Chelsea has a policy of sending out their youngsters out on loan for development purposes and also to gain more playing time. It has always been a worthwhile experience every for every young lad to move out on loan especially when it is in the premier league.

The blues had Billy Gilmour sent out on loan to Norwich City this summer for his development, the young lad was happy to move to Carrow City for the new season and was eager to play and make a difference for the team.

Having made his senior team debut for his country during the Euro 2020 competition, Gilmour became the first player to win the Mam of the match award in each of his debuts for both club and country. A lot of pundits and top managers praised the young midfielder for his understanding and maturity during games. 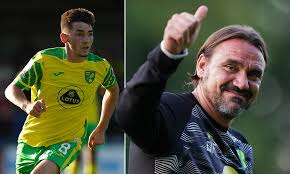 Billy Gilmour's loan move to Norwich has not been all rosy, his team is yet to pick a winner this season and sits in the relegation zone. A lot of pundits have criticized Norwich's style of play and have also blamed the coach for failing to find a rhythm to their game.

During Dani Farke's press conference this evening dropped a statement saying that his club is not meant for developing loan players but rather winning points. A lot of Chelsea fans were offended by his comments and wanted Billy Gilmour to be called back at the club by January as they feel he is not been appreciated by the coach.

Chelsea board needs to find a new club for the Scottish midfielder as it stands, the young lad might not be getting enough game time at the club or else something is been done immediately. But calling him back by January might also not be the right move, he needs to learn how to fight for his place and also work on his self-confidence.