By EvySports (self media writer) | 1 month ago

Gareth Southgate stated that he can't select players who have not been playing for their different clubs, but the John Stone case has been a special one. Gomez on the other hand has had consistent play-time for his club and was not included in the England squad list.

Although John Stones has been given valuable game time in the Carabao and Champions League. Jürgen Klopp has come out at the press to show that he is unhappy with Gareth Southgate squad list for the World Cup Qualifiers. 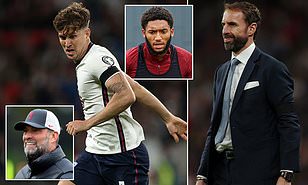 Klopp stated that Gomez has been in great form this season and was expecting Southgate to call the young Liverpool player for the World Cup Qualifiers games.

Liverpool Coach, Klopp, said that he is unhappy with the way his player was ignored.

However, the Anfield defender was left out by Southgate for the World Cup Qualifiers games against Andorra and Hungary, while John Stones started in both games. Klopp showed that he was really frustrated at the Southgate decision. He stated that Gomez is a better option than Stone because he has more experience than John Stones.