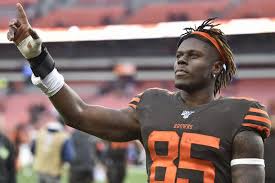 Although the American version of rugby is not popular back home in Nigeria, the two youngsters have taken giant strides over the years and now look to break into the limelight, with varying issues about marketing values and quality ratings coming their way.

First up is Iyiegbuniwe, who plays for Chicago Bears, has received heavy permutations about his chances of excelling this season in the turbo-charged running sport with oval balls, stout boots, crash helmets and shoulder pads. 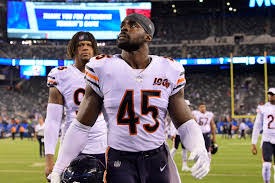 Iyiegbuniwe is again set to roll out with The Bears, whose quality and depth of players at the inside linebacker position was cited as a critical factor in their ability to stay afloat in 2019; while Nick Kwiatkoski’s impressive play off the bench, for both Roquan Smith and Danny Trevathan, resulted in a big payday from The Raiders in free agency.

With Kwiatkoski now traded, Iyiegbuniwe has been tipped to step up with the Chicago-based NFL franchise, whose search for an ideal replacement has been cut down to the 2018 fourth-round pick. 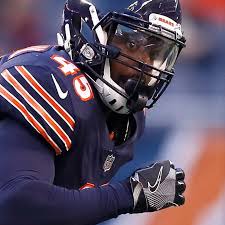 However, it will be a huge leap of faith by The Bears, considering that Iyiegbuniwe has played just 27 snaps on defense over the last two seasons, including a whopping three in 2019, and his statistics provided by Pro Football Focus are shallow, despite his strong college tape as a rangy linebacker who packs a punch.

Born October 12, 1995, Joel Iyiegbuniwe played college football at Western Kentucky University, before which he attended South Warren High School in Bowling Green, Kentucky and, though as a senior he only played in four games, he tallied 23 tackles and one interception along with six touchdowns. As a junior, he made 64 tackles with three interceptions along with four touchdowns, following which he committed to play for Western Kentucky Hilltoppers in December 2013, choosing them over Indiana State and Southern Illinois.

As a true freshman in 2014, Iyiegbuniwe played in the first three games of Western Kentucky’s season, before a knee injury ended his season, but he was still elected to take a medical redshirt in 2015 and, as a redshirt freshman, he played in all of their 14 games, recording 19 tackles and one sack. In 2016, Iyiegbuniwe, as a redshirt sophomore, once again appeared in all 14 games, during which he made 64 tackles (10 for loss), 3.5 sacks, three pass deflections and one forced fumble, which led to him being awarded 2016 C-USA Honorable Mention.

As a redshirt junior in 2017, Iyiegbuniwe played in all 13 games, recording 117 tackles (11.5 for loss), two sacks, one pass deflection and three forced fumbles, for which he was named to the 2017 C-USA First Team. After the season, he declared his decision to turn professional and was drafted by Chicago Bears in the fourth round (115th overall) of the 2018 NFL Draft by the team that appears to trust in his ability for the new season, as they have not added an inside linebacker during free agency for the 2020 NFL draft.

Iyiegbuniwe will, however, share that role with Josh Woods, as well as Barkevious Mingo to a less significant extent, as it is the Nigerians-born lad that observers believe has the right fit on the edge, with the golden chance of now logging a few snaps inside at this point in his career. 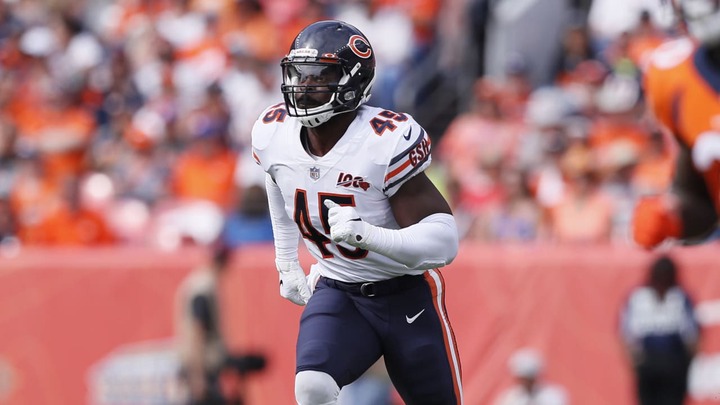 A technical citation noted: “The Bears’ depth will be tested this season, especially with the unpredictability of COVID-19. Backups will be more important than they probably ever have been, which is why a player like Iyiegbuniwe has to rise to the occasion and give the Bears another talented and ascending option at linebacker.”

Following in the same direction is David Njoku, who has avoided being traded by Dallas Cowboys in the National Football League (NFL), despite initial interest the franchise expressed in the tight end, megasportsarena.com gathered. Aside Njoku, The Cowboys were also supposedly also interested in trading for safety ace, Jamal Adams and signing free agent defensive end, Jadeveon Clowney, but their trade for the young Nigerian-born player has fallen flat, as they are unable to fit him under their salary cap.

Speculation that The Cowboys might waive Njoku began after his new agent, Drew Rosenhaus, asked The Browns to trade the Nigerian-born player, but Mike Fisher of SI.com quoted two sources as saying the Dallas-based side have no interest in releasing the youthful tight end. The Cowboys joined the NFL as an expansion team in 1960 and made it to the Super Bowl eight times, tied with Pittsburgh Steelers and Denver Broncos for second most appearances in history at the glamour, just behind New England Patriots’ record eleven outings.

While Njoku escaped being traded by the team, The Cowboys let veteran ace, Jason Witten leave in free agency to The Raiders, after he was something of a progress-stopper for Jarwin last season, then signed blocking tight end Blake Bell, formerly a part-time starter with The Chiefs. The Cowboys,  who also retained Dalton Schultz on their roster,  have a far bigger to-do on their list, with 12 days left to get Dak Prescott signed to a long-term deal, otherwise the quarterback will play 2020 under the $31.4m club tag, but nothing is being said again about Njoku leaving.