By Moblinqz (self media writer) | 3 months ago

After a rollercoaster 18 months, a Saudi-backed takeover of Newcastle United appears imminent.

The Amanda Staveley-led consortium seemed dead and buried after issues emerged over an alleged piracy disagreement with Qatar-based broadcaster, who own rights to show Premier League matches in the Middle East.

However, it appears a resolution has been made and current owner Mike Ashley will sell the club in the coming days.

Still, it is unclear just how much money will be invested into the Magpies, with financial expert Kieran Maguire previously claiming that investment could be extremely large despite FFP (Financial Fair Play) regulations.

Speaking back in May 2020, football finance expert Kieran Maguire said, "I've crunched the numbers and Newcastle United FC have an FFP profit of around £82 million over the past two seasons to the end of 2018/19. The allowable loss is £105 million over a three-year period. 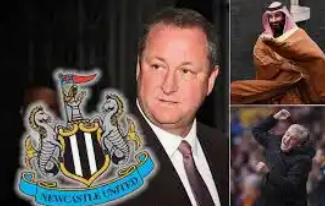 Assuming the new owners sign players on four-year deals, they could spend anywhere between £150million-£200 million in one window or a season and still stay within the Premier League limit.

There is little love towards Mike Ashley - and rightly so - but he's leaving a financial legacy that is attractive to any rich successor."

Financial Fair Play rules were also eased last year due to the impact of the pandemic, with clubs' financial results in 2020 to be assessed alongside those for 2021, rather than as two separate entities.

Newcastle have a net spend of around £60million since then but investment could still be significant, with The Mirror claiming that the Magpies could have up to £250million to spend on players and infrastructure.

If investment is smart, north London clubs Tottenham Hotspur and Arsenal could be in danger of being left behind as their respective owners have notoriously refused to spend efficiently in recent years.

They will both hope that FFP rules mean Newcastle can't spend their way to instant success, something Andrea Traverso, UEFA's director of financial sustainability and research, has previously hinted won't be possible.

"COVID-19 has generated a revenue crisis and had a big impact on the liquidity of clubs," he said earlier this year".

"This is a crisis which is very different from anything we have had to tackle before. In such a situation, obviously, clubs are struggling. They have difficulties in complying with their obligations."

I think, in general, rules must always evolve. They have to adapt to the context in which clubs operate.

"The break-even rule, the way it works now, it looks backwards. It performs an assessment of a situation in the past. The pandemic represents such an abrupt change that looking to the past is becoming purposeless."

Content created and supplied by: Moblinqz (via Opera News )