The Gunners disbursed more than many predicted during the summer most notably their club-record purchase of Nicolas Pepe but were more reserved in January as they concentrated on strengthening their defensive options.

Here are the latest news on possible signings and goings at the Emirates Stadium. 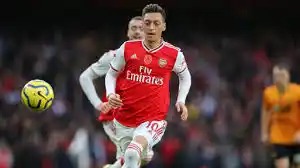 Arsenal midfielder Mesut Ozil has turned down an offer from Turkish Super Lig side Fenerbahce.

The German star will see his deal at the Emirates expires next summer and Ozil is yet to feature since the restart leading to widespread presumption linking the player with a move away during the transfer window.

However, the former Real Madrid man is apparently desperate to see out the remainder of his contract in North London, and Gunners manager Mikel Arteta has indicated that Ozil could still have a future at Arsenal.

However, Fenerbahce have been strongly connected with a swoop for the 31-year-old in recent weeks, but according to Bild, Ozil has denied the Turkish outfit's advances.

The report claims that Ozil is keen to fight for his place at Arsenal and is set on staying put until next year, and the German's mammoth £350,000-a-week wages were also thought to hamper negotiations with Fenerbahce.

Ozil has attained 44 goals from 254 appearances for the Gunners since arriving in 2013, but the midfielder has only scored one goal and two assists from 18 Premier League outings this term. 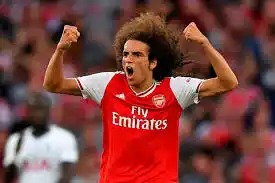 Arsenal head coach Mikel Arteta has hinted both Mesut Ozil and Matteo Guendouzi may have a future at the club referring to Granit Xhaka’s own remarkable turnaround as an example.

While Guendouzi proceeds to be left out after his antics in the defeat at Brighton last month, Ozil has yet to kick a ball since the season started again.

Arteta has given brief shrift to any questions asked about a potential return for the pair, with neither being named in any of the past seven matchday teams.

Guendouzi is reportedly training alone after his bust-up with Brighton’s Neal Maupay, with his temperament is understood to be a concern to Arteta, who has likewise left Ozil the club’s highest-earner on the sidelines for the past 10 games.

While the writing may seem to be on the wall with regards to their respective futures at the club, Arteta spoke of another player who has overcome tough times in recent months.

Former boss Unai Emery stripped Xhaka of the captaincy after he pledged at Arsenal fans while being substituted during a draw with Crystal Palace in October.

Xhaka’s affair with supporters has been mixed since his arrival in 2016 but, under Arteta, his performances have boosted and he has become a major part of the side.

“The challenge with Granit was to persuade him that there was still a place for him here, that I had big notion in him and that things can turn around pretty quickly in this industry,” Arteta said when asked about Xhaka’s return to form.

He had to send the right messages, first of all he had to believe that he could do it and if that was the case we were going to support him all the way through. I am really glad to hear and sense as well the reaction from the fans towards him.

“If you are willing and if you are consistent and you really want to do it there is always a way back.”

Stated on whether Ozil and Guendouzi could return if they show both the willing and consistency Arteta called for, the 38-year-old said: “That applies for any player and any member of the staff. All players understand this.

If you show that, that you decide to do the best not only for yourself but for the team and for the club, I think everyone will accept you.

“It’s not just me that needs to give the green light, it’s everybody that has to be supporting. You need to feel that support from everybody because otherwise it’s a very uncomfortable situation.”

The 23-year-old joined last summer on a season-long loan and has impressed lately, with Arteta emphasizing how keen he would be to keep the Spain international at the club.

The PA news agency comprehends that is likely to be the case, with a loan move fitting all parties and Ceballos staying in north London for the 2020/21 campaign.

Arteta’s side take on Aston Villa on Tuesday night fresh on the heels of an FA Cup semi-final triumph over Manchester City.

Aubameyang is another player whose future at the Emirates Stadium remains ambiguous as his current contract expires next summer.

Talking after the semi-final win, Arteta said he hoped such victories could convince his captain to sign a new deal and now he is eager for that agreement to come sooner rather than later.

“When I was talking about the anxiety we have on the table, obviously he is one of them,” added Arteta.

"There is another one of obviously where we are going to finish and whether we play in Europe or not which is going to have an impact and all the circumstances with the market and how it is going to develop."

“With Auba, I think I have been very obvious what I want the quicker we do it, for me personally, the better because the player will be more concentrated, more serious and more calm but we have to respect the timings as well and the needs the football club has.” 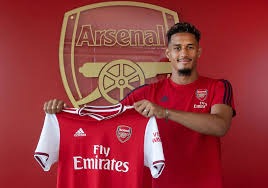 Saint-Etienne affirmed that William Saliba is returning to Arsenal after failing to agree a short-term extension to his loan spell.