By SpeedFingers (self meida writer) | 19 days 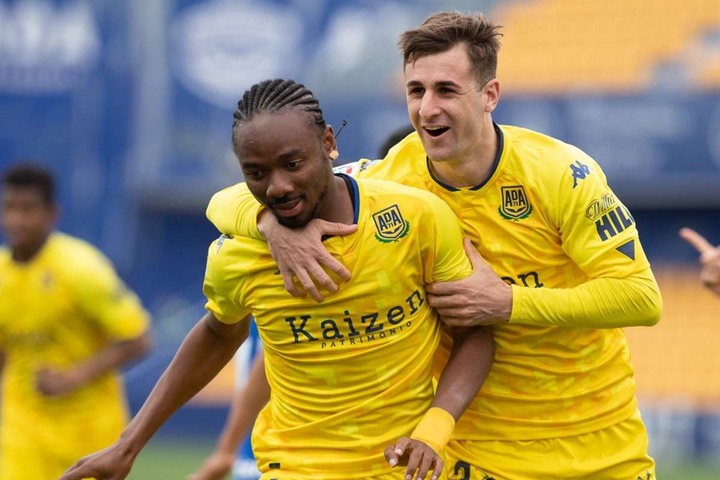 Three Spain-based Nigerian players hit major headlines across the country, after notching a haul of goals for their respective clubs in both the domestic and continental fronts, with their efforts also coming across male and female competitions. 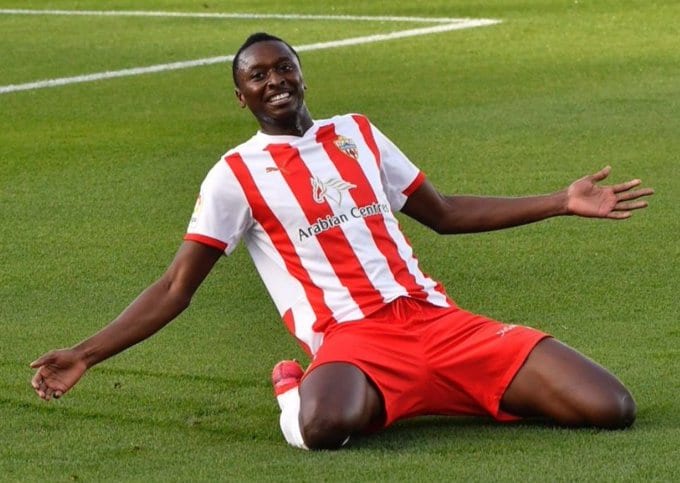 This follows the continued remarkable burst of goals from the duo of Asisat Oshoala and Umar Sadiq, who both continue raining goals one-by-the-dozen, while former Golden Eaglets’ captain, Kelechi Nwakali also popped into the picture.

While Oshoala netted for Barcelona Femeni away to Manchester City Ladies of England in the quarter-finals of the UEFA Women’s Champions League, Sadiq got another beauty added to his name with UD Almeria in the Spanish second division. 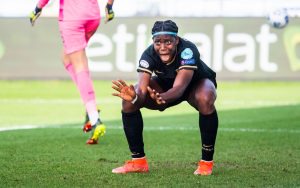 In Spain's second division, Sadiq knocked home his 15th goal of the current season, which is his first in The Land of The Armada, following his arrival from Partizan Belgrade of Serbia last summer.

The former AS Roma of Italy and Glasgow Rangers of Scotland tall attacker made hay once again, as he helped Almeria win 3-0 away to Malaga and stay within the promotion contest for spots in next season’s LaLiga campaign. The Rio 2016 bronze medalist with Nigeria’s Olympic Eagles notched his team’s third goal in the 77th minute, when he tapped home from inside the six-yard box for the team that stopped him from a possible Super Eagles’ debut in the Africa Cup of Nations qualifiers last weekend.

Sadiq put behind him the disappointment of failing to honour his first senior national team invitation, as he continued his surge with Almeria, who now have 60 points from 32 matches, just one outside the automatic promotion spots held by Espanyol and Real Mallorca, who are both on 61 points in Segunda Liga.

In the same division, Kelechi Nwakali scored his first goal of the campaign for survival chasers Alcorcon and took special delight with his effort that helped his side continue their push for safety with a 1-1 draw against visiting Real Oviedo.

Starting his ninth successive league game for the hosts, the Chile 2015 FIFA U-17 World Cup-winning captain needed just 63 seconds to register his first goal for Alcorcon, as he struck from outside the box and left the visitors’ goalkeeper, Joan Femenias stranded.

Alcorcon went into the break with the slim lead, but the visitors replied after the restart with a triple substitution on the hour, following which Nwakali was left in frustration, as Argentine forward, Gustavo Blanco rescued the visitors six minutes from time and both side’s eventually shared the points.

Nwakali, who featured for 88 minutes, ended with a game rating of 7.6, completed 100% of his take-ons, achieved 76% of his passes and made one key interception, while his goal ensured that Alcorcon got a point that takes them off the relegation zone to 18th position with 32 points.

In England, Oshoala scored her fourth goal in the UWCL and helped Barca reach the semi-finals at the expense of Man City, thereby setting up a ate for her side against one of the French duo between Paris-Saint Germaine and continental defending champions, Olympique Lyon for a place in the final.

That possibility lingers on, after the Nigerian national team, Super Falcons captain initially drew Barca level in their 2-1 loss away to The Citizens in England, but the visitors from Spain still went through on 4-2 aggregate, with Oshoala also having scored in the first leg, which her team won 3-0.

'Super Zee' made the best of her seventh appearance in the competition, as she started along with Caroline Graham Hansen and Mariona Caldentey in attack for Lluis Cortes' team, for which she came close to securing the equaliser in the 22nd and 29th minutes, but was flagged offside on both occasions.

The four-time African Women Footballer of The Year got another golden opportunity to level the scoreline later on, but she was denied by The Citizens’ goalkeeper, Ellie Roebuck inside the six-yard box three minutes from half-time.

After the restart, Caldentey brilliantly set up Oshoala, who made no mistake to fire past Lucy Bronze and Robuck in the 59th minute and, before being taken off in the 79th minute, the Falcons' captain was blocked by City's goalkeeper inside the area.

Incidentally, Oshoala's goal for Barcelona in their first leg victory over City was the Spanish club's 100th in the UWCL, and she celebrated her latest feat with another expression of gratitude to God for making it possible, as she stated on social media: "The plan of almighty Allah will always prevail. No rush. ALHAMDULILAH."

BREAKING: Chelsea & Manchester City And Others Are Set To Quit The European Super League

Breaking news: Chelsea on the verge of pulling out of the European Super league