The 2021/22 Premier League fixtures were released on Wednesday and here is what the big six opening fixtures look like.

Chelsea will open the season against Crystal Palace, followed by matches against Arsenal, Liverpool, Aston Villa, Tottenham Hotspur, and Manchester City over the next six weeks.

Liverpool will travel to Norwich on the opening day. Then they face Burnley, Chelsea, Leeds, Crystal Palace and Bentford in their next six games. 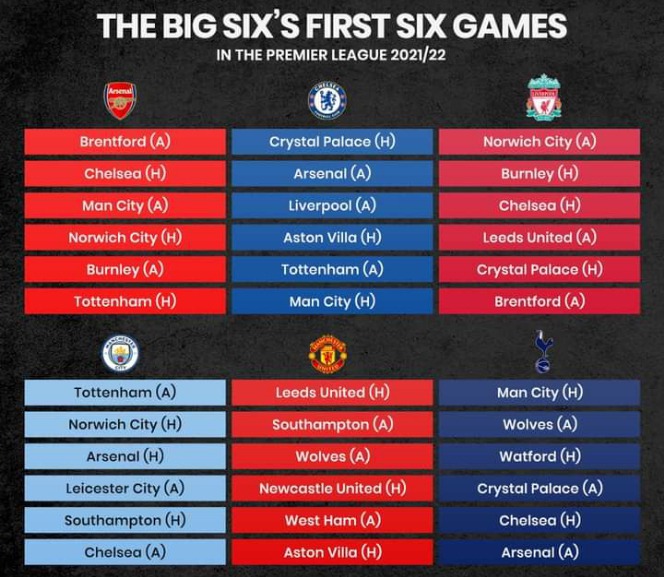 Arsenal are away to newly promoted Bentford on the opening day, then they take on Chelsea, Manchester City, Norwich, Burnley and Tottenham.

Chelsea has the most difficult start to the season, and they will also compete in the UEFA Super Cup. The Blues are making waves in the transfer market and are interested in signing Erling Halaand and Archaf Hakimi.

Who do you think will be on top of the league after the first six fixtures?

Photos: The '4-Gate' Cotonou Prison Where Sunday Igboho Will Be Held For Weeks

Dear Ladies, These 20 Stunning Ankara Styles Are Good For You

Tega is looking more beautiful than when she came into the house. The makeup did her bad -Pere

Checkout The Meaning Of The Secrecy Oath Which The Presidency Ordered Its Staff To Take.