Jon Moxley remembered Brodie Lee during a recent interview with Justin Barrasso of Sports Illustrated. The former AEW World Champion shared his reaction to Brodie Lee's passing and paid tribute to Brodie Lee in the best way possible by reminiscing the moments they shared together.

Jon Moxley knew Brodie Lee from the days when they were both coming up on the independent circuit. Moxley and Lee were both picked up by WWE, where they were rechristened as Dean Ambrose and Luke Harper, respectively. 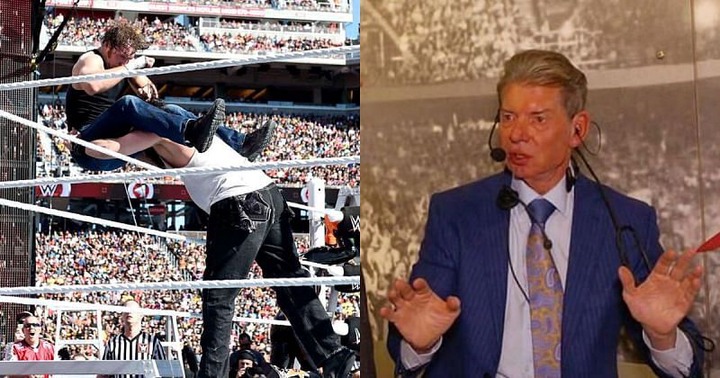 While Ambrose and Harper battled against each other during their time in the Shield and Wyatt Family, they were also involved in a highly-entertaining multi-man Intercontinental Championship Ladder match at WrestleMania 31. The biggest highlight of the match was Ambrose being sent crashing through a ladder outside the ring courtesy of Lee.

Moxley spoke about the IC title match and revealed that they wanted to have a highlight reel moment, and the only way to do that was to have a big bump. Moxley admitted that it was a 'sketchy' spot that even 'bugged' out Vince McMahon.

Moxley added that he would not have trusted anyone apart from Brodie Lee with the spot.

"We wanted to make the highlight reel. We figured the only way we could do that was if I nearly killed myself with a death-defying bump. So we devised this spot where he powerbombs me from the ring to the floor through a steel ladder, and that's f------ sketchy. It's an extremely dangerous bump, going backward at a high angle. It was a gnarly bump. Vince [McMahon] bugged out. He thought I was dead, which meant it was a good f------ bump. And we made the highlight reel. I maintain to this day that I would not have trusted anybody else on the planet with that bump. I put my life in his hands, and I walked away."

It wasn't a secret to anyone in the business how good he was: Jon Moxley on Brodie Lee's rise as a singles star in AEW

Despite winning the IC title on one occasion, Brodie Lee was never pushed a top singles star in the WWE. Lee was always used in a utility role, according to Moxley.

Jon Moxley explained that Brodie proved that he had all the tools to be a top singles main-event performer when pushed as the centerpiece of the Dark Order in AEW.

“It wasn’t a secret to anyone in the business how good he was. But he was always used in a utility role or part of a group. For him to be the centerpiece of a group as a solo act, he proved he was a main-event performer.”

Moxley has had matches with Brodie Lee in four different promotions, and he even defended the AEW World Championship against the Dark Order leader at Double or Nothing.

Moxley always loved to work with Lee, and he didn't hesitate when Tony Khan approached him about going up against his former WWE colleague.

"And we wrestled so many times. Whether it was on the indies, in The Shield–Wyatt war, six-mans on house shows, and European tours, it felt like we were always together. When Tony Khan asked me about Brodie in AEW, I said, 'Hell yeah, I want that match.' We could wrestle each other in our sleep. He was so f------ good."

Brodie Lee's passing has brought the pro wrestling community together as several Superstars, irrespective of their promotional allegiances, revealed stories and memorable moments they shared with the former AEW TNT Champion.

Brodie Lee passed away at the age of 41 due to a lung-related issue.