The Story Of Venus and Serena Williams “The tennis champions” 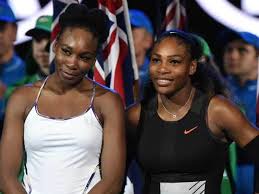 Venus and Serena Williams took the tennis world by storm when they were still in their teens. During the late 1990s, the two African American sisters became two of the sport’s biggest stars. Their awesome power and bold style of play helped them dominate their opponents. Venus Williams, the older sister, was born June 17, 1980, in Lynwood, California. Serena was born 15 months later, on September 26, 1981, in Saginaw, Michigan. Venus and Serena and their three older sisters grew up in California. Venus began playing tennis at age four and Serena at age five. They learned the game from their father, Richard Williams. The Williams family moved to Florida in the early 1990s. Both Venus and Serena did well as junior tennis players. However, their father limited the number of tournaments they played in. He wanted his daughters to concentrate on their schoolwork. He also was concerned that they would get tired of tennis if they competed too often.

Both Venus and Serena became professional tennis players when they were 14 years old. Richard Williams continued to limit his daughters’ playing time. That made their sudden breakthrough as top tennis players even more dramatic. In 1997, Venus entered the United States Open, the most important American tennis event, for the first time. She stunned everyone by making it to the final—the last match that decides the champion. However, she lost the final to the top-ranked player, Martina Hingis. In 2002, Serena defeated Venus to win the French Open, another grand slam event. Venus then held the top ranking in women’s tennis, and Serena was ranked second. They became the first siblings to hold the top two positions in tennis. Later in the year, Serena moved past her sister as the top-ranked player. Serena won the Wimbledon and U.S. Open finals in 2002 and the Wimbledon final in 2003. In 2005 Serena won the Australian Open and Venus won Wimbledon.

Venus and Serena often play as partners in doubles events—matches between pairs of tennis players. They have won the doubles championships in all four grand slam tennis tournaments.

Content created and supplied by: Update-24 (via Opera News )