By Niceguy17 (self media writer) | 7 months ago

Abraham, and his fantastic start to his stay in Rome. The fact that Roma is winning and playing well, as well as José Mourinho. Every Disney sports tale is still in its early phases. Also, there's that drumming movie.

Roma beat Udinese 1-0 to climb up to fourth place in Serie A. Tammy Abraham scored the game's only goal. 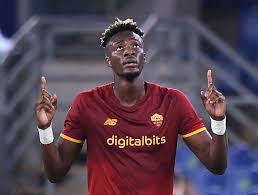 On Sunday, Roma fell to Verona for the first time under Jose Mourinho, but Abraham's strike from Riccardo Calafiori's cross made it four wins in five league games.

They are three points behind Napoli, who preserved their 100 percent start with a 4-0 win over Sampdoria.

Inter Milan and AC Milan are the only teams in the league without a loss, and they are one point ahead of Roma.

Inter triumphed 3-1 at Fiorentina on Tuesday, while Milan won 2-0 at Venezia and Juventus won for the first time this season against Spezia.

Abraham, who joined Roma for £34 million from Chelsea in August, has three goals in seven games for Roma, including two in five Serie A appearances.

Mourinho's team, who had won six consecutive games in all competitions before losing 3-2 to Verona, finished the game with ten men after Lorenzo Pellegrini was booked for the second time in the 89th minute.