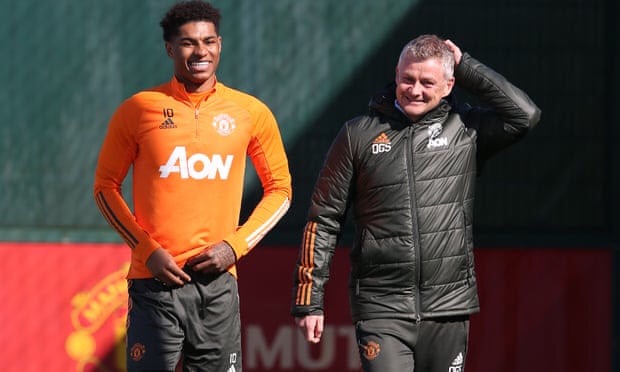 After undergoing surgery in August, the 23-year-old might make his season debut against Leicester on Saturday. Solskjr was not implying that Rashford had not previously been completely focused on his game, but rather that now that he is fit again, he must let nothing to distract him.

“I am confident that we will see Marcus at his finest in the years ahead,” the boss said. "He has accomplished incredible things at a young age, but he is now entering the prime of his career as a footballer, and he is more seasoned." He's had some time to think about things. You know what he's done off the field, because he's done some incredible things, and now it's time for him to prioritize, perhaps prioritize his football and focus on football because he's got a challenge on his hands here at Manchester United, a challenge on his hands to play for England.

“I believe Marcus is one of those people that rises to the occasion and will continue to do so. He'll express himself and his talent, and he understands that we want a lot from him, but we'll give him the time he needs to come back to who he was and who he can be."

Rashford has battled against child poverty and forced the government to make two U-turns on school lunches. "He does look fresh, he looks keen," Solskjr added. He's gained some muscle and bulked up a little. Of course, he had to shoulder a lot of the responsibility for us because we've had injuries, and he's done so much for the team and off the pitch at such a young age.

“I don't want to say he got back to being himself, but Marcus Rashford bouncing around with that energy and without having to take on too much responsibility is a beautiful sight to witness. He is reassigned to a new team. Jadon [Sancho] has arrived, Mason [Greenwood] has matured, and Cristiano [Ronaldo] has arrived.”

Before the international break, Solskjr used Ronaldo as a substitute in United's 1-1 draw with Everton. Sir Alex Ferguson, United's most successful manager, was caught claiming the Portuguese should have started, but the Norwegian laughed it off. Solskjr stated, "I'm fairly relaxed about it." "It's not really fair on the gaffer,"