By Okoh.com_official (self media writer) | 2 years ago 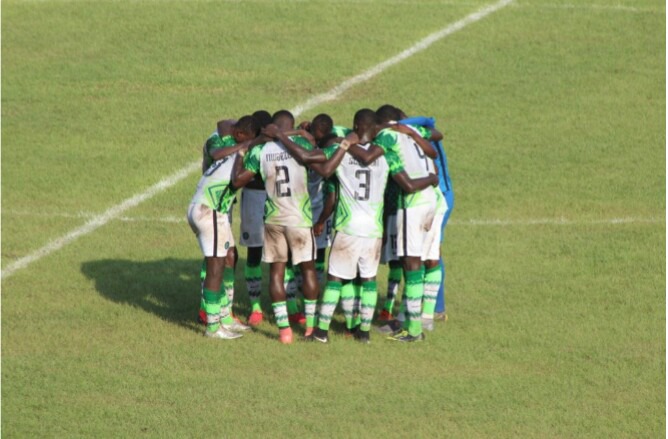 The Flying Eagles of Nigeria now have it all to do on Wednesday against perennial foes Ghana after failing to hold on to their slim one goal advantage against Ivory Coast today with the match eventually ending 1:1.

Christopher Nwaeze’s delightful header off an eloquently taken curling free-kick from Wisdom Ubani had powered Nigeria ahead in 58 minutes only for the Ivorian youths to draw level at the death in 93 minutes.

The Nigerian contingents had been talking tough leading up to this encounter but from my point of view, they failed to match this up with action on the pitch against Ivory Coast. Flying Eagles striker Peter Olawale was quoted yesterday as saying that they have come to Benin to win the Wafu Cup whilst coach Bosso had called the tough group ‘a blessing in disguise’.

However, it must have felt like ‘a curse in the open’ when goal scorer Nwaeze was shown his marching orders in 70 minutes for a rather innocuous foul which only served to invigorate the Ivorians as they took advantage of their extra man to pile pressure on the Flying Eagles.

This eventually paid off in 93 minutes when a pass sliced open Nigeria’s right back area with the fullback well beaten and the young Ivorian striker coolly finishing off with aplomb to break Nigerian hearts.

I wouldn’t call it a cruel blow as I had noticed both full back areas of the Flying Eagle as suspect throughout the encounter with the effect of those shortcomings coming home to roost at the worst possible time from Nigeria’s perspective.

But the story would have been so different in the 69th minutes had Wisdom Ubani done the needful: through on goal after fending off an Ivorian defender with just the goalkeeper to contend with, the Super Eagles hopeful sliced his effort just wide off the mark (a chance missed to make it 2:0 for Nigeria; one that came to haunt him at the end of the game as he collapsed to the ground after the final whistle, contemplating what could have been).

The pitch was deplorable, a bad advert for African football but both Nigeria and Ivory Coast were a victims of this.

That aside, it was difficult at times to decipher the pattern of play of Nigeria. They often deployed long, hopeful yet aimless long balls from defence to attack. Decision making in the opponents final third was haphazard on occasions: some of the wingers went for goal rather than cross the ball whilst low and high crosses (when delivered) were poorly executed.

The Flying Eagles struggled to carve out clear-cut scoring opportunities whilst our fullbacks were often caught out of position – ultimately leading to the equaliser. Ivory Coast’s higher press unsettled Nigeria more than once.

I might be wrong about this but the Ivorians appeared to win the physical battles whilst technical injection on Nigeria’s part was hard to see.

Having said all that, the pitch clearly hampered the ability of the Nigerians to move the ball on the ground as they would have liked. They put the Ivorians under sustained pressure earlier on leading to so many corner kicks for Nigeria (which weren’t utilised). Wisdom Ubani delivered some beautiful through balls in the first half which should have lead to more productive outcomes. There was, in fairness, purpose to their play, but this wasn’t always apparent and most of their moves broke down needlessly due to limited vision from the players.

In short, Nigeria were not as compact, cohesive and creative as I would have loved to see even though the pitch was admittedly disgraceful. Still, there were positives to take out of this encounter.

They will clearly need to do more to win the tournament.

I am yet to see the Ghanaians play but I suspect they will offer a sterner test than the Ivorians. The chances of winning this group have just become slimmer with Ivory Coast’s equalising goal.

Content created and supplied by: Okoh.com_official (via Opera News )