"Chelsea thought it was best for me to go to Swansea and it's turned out well because I've developed a lot here as a player and a person as well, so it was definitely a good move for me," Conor Gallagher told WhoScored.com this week. The 20-year-old midfielder signed a three-year contract with Chelsea last August before being sent on loan to London outfit Charlton.

On January 14th, he was recalled by the Blues. A day later, his move to Swansea was confirmed. Since then, he's been a regular for Steve Cooper's side, starting all 13 league matches and has been a creative force in this Swans outfit, providing five assists for the playoff chasing south Wales side; only Andre Ayew (6) has more of all Swansea players in the Championship this term.

Combined with his two assists at Charlton in the first half of the season, Gallagher has provided more assists (7) than any other player aged 21 and under in the Championship this season. Factoring in his six league goals for the Addicks, and it means only Brentford's Bryan Mbeumo (21) has had a direct hand in more Championship goals than Gallagher (13) using the same parameters in England's second tier this term. 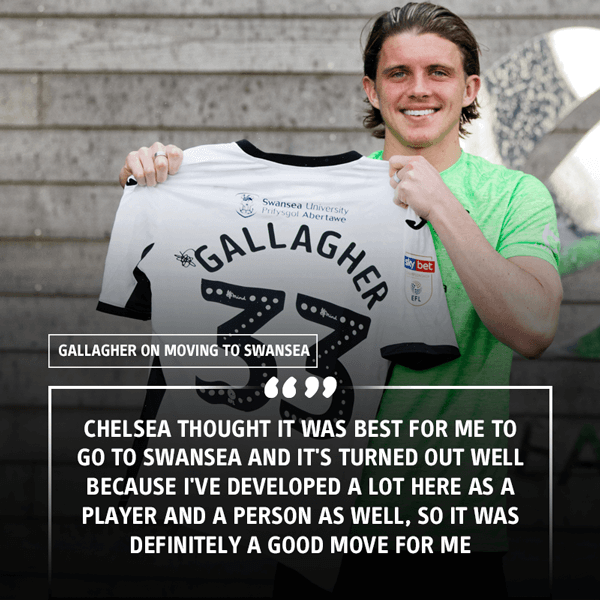 When quizzed on how his role has differed between his time at Charlton and Swansea, the youngster said: "I think at Swansea they have more of the ball than Charlton did, and he (Cooper) gave me a chance to create more chances and I think that's why I've got a number of assists for Swansea." Indeed, Swansea, with 51.8%, have had more possession than Charlton (46.5%) this season, so the difference in approaches between the latter and the former has contributed towards Gallagher's increase in assists as he has more time on the ball to pick his pass.

The lack of goals for Swansea, though, isn't for want of trying. Of all current Swans players, Gallagher's average of 1.8 shots per game is the fourth highest and, in his own words: "I think I've been a little bit unlucky not to score a couple of goals with Swansea, but I think that that will come," and he's right. Swansea (9.5) rank eighth for key passes per game in the Championship this season, so given the frequency with which the chances are created, it is only a matter of time before Gallagher bags his first goal for Cooper's side.

"As long as I'm helping the team as much as I can, that's the most important thing," and it's this level headed approach from Gallagher that has sat well with Swansea and supporters on the back of his January arrival. Gallagher, too, wasn't the only loan capture at the turn of the year. Rhian Brewster joined from Liverpool, while Marc Guehi made the move from Chelsea to Swansea a few days prior to his Blues teammate joining him at the Liberty Stadium.

With a familiar face in Cooper at the Swansea helm, players and a manager he knows well have helped Gallagher adjust to new surroundings. "It's helped me settle in at the club having good mates there already; it's helped all three of us (Gallagher, Guehi and Brewster) really." This is not only a boost for Gallagher, but Swansea as a whole, with the midfielder going on to add: "Growing up playing football with them, you know each other's games and they know what you're good at and they know where you can be better at."

Crucially still, is that Gallagher is working under a manager who he knows from earlier in his career. Cooper was England boss at the 2017 U17 World Cup as England secured glory in India, with three of Swansea's current squad all playing their part in the competition. But has Gallagher noticed a change in Cooper from when the two worked with one another three years ago? "I don't see much difference at all. Maybe he's more demanding because we are older now and there's more expectations which is understandable, but he's still the same in most ways."

Given the difference between international and club football, it's no surprise to hear he is more demanding now than when he was England U17 manager, as the additional pressure that comes with working with players on a longer basis and the matches more spread out, it's only fair he expect more from those at his disposal. With Swansea four points off the top-six at the time of writing, it's evidently a managerial approach that is reaping rewards in his debut campaign in club management. 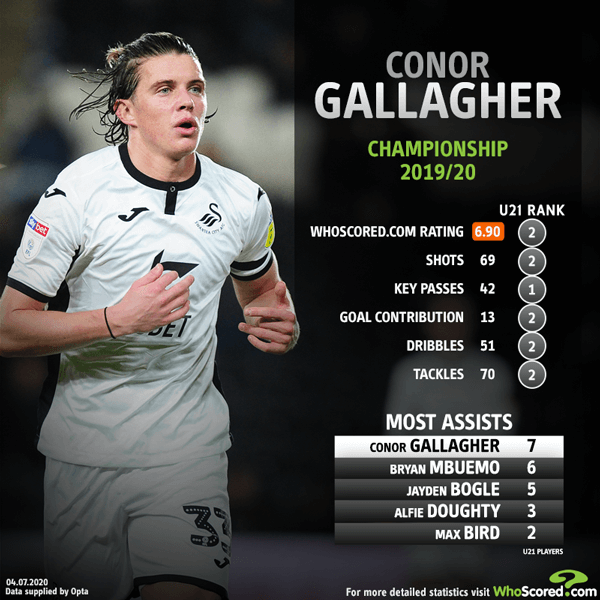 And it's not just Cooper enjoying a solid debut campaign in club football. This season is Gallagher's first in senior football having played his way through the ranks at Chelsea before his loan spell to Charlton was confirmed back in August. "It's been a great experience," he told WhoScored.com. "First time playing men's football in a league like the Championship. It's been tough, but very good for me. I've developed well as a player, I'm excited to end the season strongly and excited for next season too."

But just what has been the biggest difference between youth team football and playing for a senior side in the Championship? "The physical aspect of it." That's hardly a surprise given he has played for a Charlton side (12.5) that has been fouled the ninth most times in the Championship this season and is currently plying his trade for a Swansea outfit (12.2) that sits 11th in the same table.

"Playing in the under 23s, you're playing against 18 and 19 years olds, and then you're playing against men. It's more physically demanding and it's tougher, but I don't think it's that much of a difference in terms of football. I think I went into the Championship and started very well and just kicked on from there, and then grew in confidence in every game. So I just think it's the physical side of it is a big difference."

Given Gallagher's commendable start to life in the Championship, the physical aspect of the league has clearly had minimal impact on his footballing ability as he continues to prove why he is so highly rated by those at Chelsea. Having started 38 of 40 league matches across spells at Charlton and Swansea, it's important now that Gallagher maintain that run of regular game time, not only for his development; but to prove his worth to Chelsea too.

"It's very important that Chelsea have seen what I can do in the Championship with two different clubs," Gallagher said when asked on his playing time and making an impact for his parent side. "If they think I'm ready next season, then great, if they think another loan, then that's fine, I'll take that opportunity again." Fortunately for Gallagher, and Guehi for that matter, too, is that Chelsea have a man at the helm prepared to look to the youth academy to swell his squad ranks.

Household names Hakim Ziyech and Timo Werner are joining this summer from Ajax and RB Leipzig, respectively, but Lampard has previously turned to youth having handed Tammy Abraham, Mason Mount, Fikayo Tomori and Reece James first team opportunities this season following loan stints in the Championship. "It definitely makes me very hopeful, as it does with other Chelsea youngsters, seeing how many youngsters have come through this season, so you know that it's possible if I keep working hard and playing well then hopefully I'll get my chance." 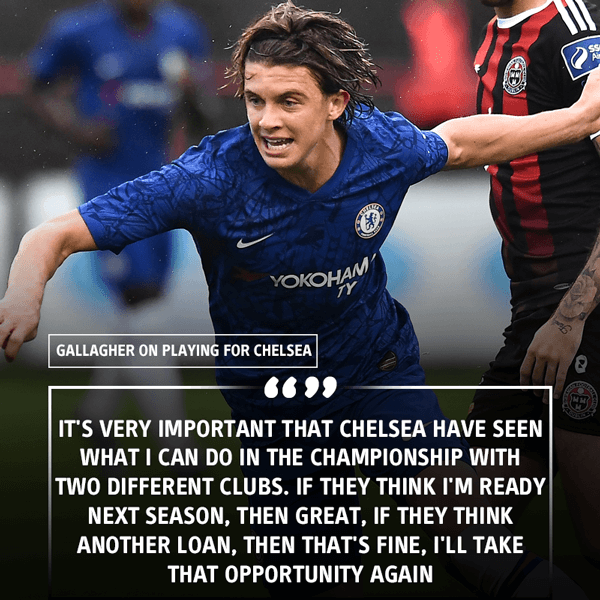 It's a step up from the Championship to the Premier League, but Abraham and Mount have each excelled in their own right on the back of their respective time in the former competition to become regulars for Chelsea in the latter. There's no reason why Gallagher can't follow suit as he looks to make a name for himself for the Blues.

Importantly still is that Gallagher's form in a Swansea shirt hasn't gone unnoticed at Chelsea. "Chelsea are always in contact with me. They have staff that look after the loan players so they always keep in contact and give me advice and and show me what they think I can work on. Frank lampard has kept in contact a little bit. He sent me a message to keep up the good work, so that's always nice to hear. I think he'll keep in close contact with every loan player because that's the type of manager he is"

That must surely be a confidence boost? "Yes, for sure. He likes the young players and to bring them through, so yeah it makes everyone hopeful whose on loan. It's very exciting."

To round off our chat with Gallagher, we brought up his WhoScored.com strengths. From his season, the young midfielder has developed strengths of 'dribbling' and 'defensive contribution'. To the unitiated, does Gallagher believe they to be a fair representation of his game? "Yeah, I like to say i'm an all-round midfielder, box the box most likely. I like to try and score and assist as much as possible and work hard off the ball defensively as well. I think it's just as important what I do defensively and then what I do offensively as well."