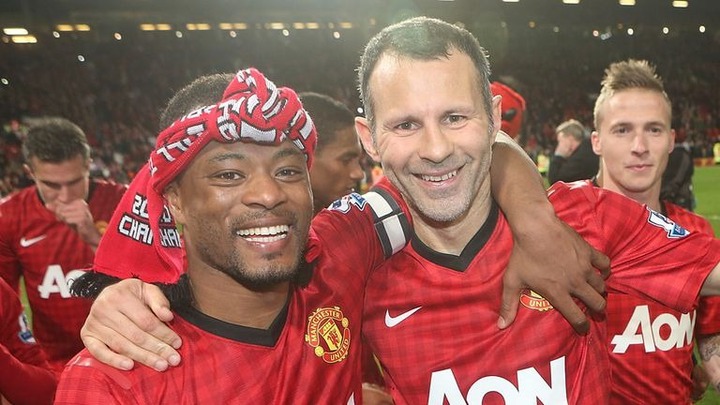 We asked you, The United Stand fan base to vote for whom you believed were the greatest ever player in their respective shirt number for the starting 1-11. After over 19k votes, here’s the lineup you have created.

Arguably the greatest goalkeeper to ever play in the Premier League. The Great Dane was a mammoth in goal and would be the ideal man to lead from the back and control his back four; a back four in which all four members captained the side. De Gea deserves an honorary mention for his sublime performances in the Premier League era; almost single handedly saving United for multiple seasons after Sir Alex’s departure.

The one-club man and United captain for many years. Neville was Mr. Consistent for over a decade at the club and left a massive gap at right-back in his last few seasons before his retirement in 2011; a gap that has arguably only been filled this season by Aaron Wan-Bissaka.

The United Stand fan base voted for the Frenchman to wear the number three jersey over Denis Irwin. Irwin is regarded as one of the best left-backs to ever play for United but Evra’s latter career is presumably etched into the minds and hearts of many fans growing up watching Premier League era football. Uncle Pat is therefore in at left-back as the best number three of United’s Premier League era.

The number 5 & 6 jerseys chose themselves really. Both Bruce and Rio comfortably were voted the best in their respective shirt numbers, and rightly so. Although their competition wasn’t immense, this centre-half pairing would be colossal in the Premier League today. The physicality and fearlessness of Bruce paired with Rio’s calmness and passing ability would make for an ideal partnership against any forward line.

A somewhat controversial choice here with the number 6 jersey. This clearly saw two opposite age demographics amongst the fan base collide as Pogba and Stam battled out for the ‘6’ shirt. Unlucky for both Pallister and Brown who didn’t even get a look in; only 10% split the Frenchman & Dutchman. Stam was a key component in United’s ’99 treble winning side & despite Pogba not fully showing his full potential in a United shirt as of yet, he has already won the World Cup and become one of the biggest stars in the game after coming through the United youth academy and looks set to commit his future at the club too. 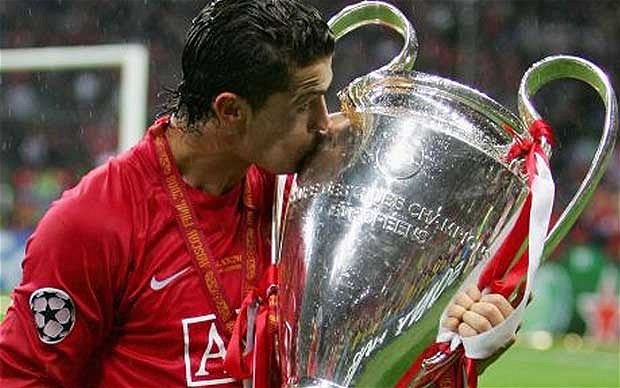 The most prestigious shirt at the club, the famous number 7 belongs to ‘CR7’ himself, Cristiano Ronaldo beats Beckham, Cantona & Robson in the polls. Despite being one of the greatest players to play the game, this is the one shirt that will cause the most debate. What is there to say about the Portuguese phenomenon, five Ballon d’Or’s, as he lifted his first with United back in 2008 after winning the Champions League with the side.

Another Class of ’92 graduate makes it into this Staring XI as United’s greatest number 8 to play in the Premier League. I’m truly baffled as to how Anderson only accumulated 14% of the votes but I guess some legends of the game are forgotten about. Nicky Butt though does deserve this in all seriousness. He made 270 appearances for the club in the Premier League alone and would make for a good partner alongside Paul Pogba in the middle of the park.

Both number 9 & 10 have been selected as strikers for the club, unsurprisingly. The results of the polls are too unsurprising, with both Andy Cole and Wayne Rooney walking their respective polls. The Englishmen scored a combined 276 Premier League goals for United with Wayne Rooney scoring 183 of those; which led him to become United’s record goal-scorer. Could you ask for a better two upfront with them at their prime?

The obvious choice for the number 11 shirt was the man who wore it for the first 22 of United’s Premier League years. Ryan Giggs wears the last remaining jersey in the first eleven at the club and will play on the left wing. Who else would it realistically have been other than United’s record appearance holder with 632 Premier League appearances alongside over a century of both goals and assists within the competition? 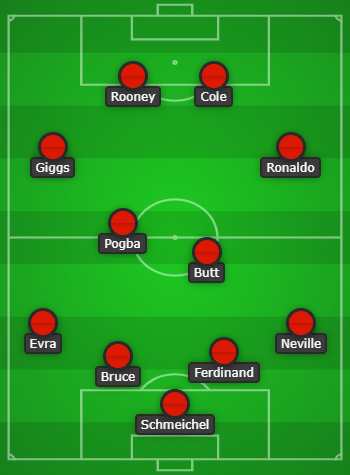 Would you change anyone from this eleven? Let us know your thoughts