Arsenal's saka was forced off against Brighton owing to a possible injury. 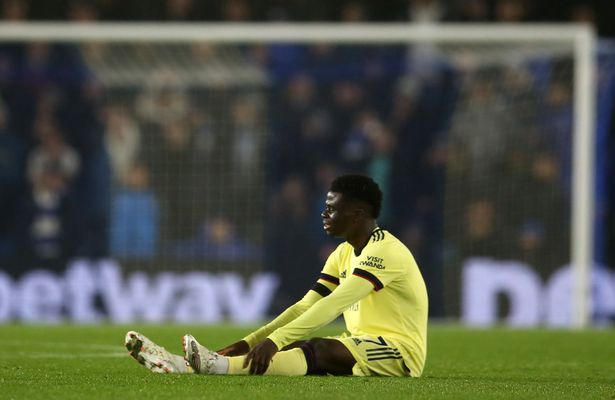 Arsenal were dealt a potential injury blow on Saturday when Bukayo Saka was forced to leave his team's Premier League match against Brighton after failing to finish.

The Gunners drew 0-0 on the south coast to maintain their recovery from a poor start to the season in 2021-22.

However, both they and England may be paying the price for a hit to their No.7 in the last minutes of the game at the Amex Stadium.

Saka was forced to leave the game with time running out on Saturday after colliding with a Brighton player.

Because the teenager appeared to be in pain, manager Mikel Arteta decided to take him out of the game and replace him with Ashley Maitland-Niles.

Mikel Arteta, the team's manager, acted quickly after the game to allay worries about his fitness.

"He should be all right. He received a jolt, but he should be fine "At the post-match press conference, he told reporters.

Despite a late penalty appeal, Maitland-Niles had little time to change the game's trajectory, and Brighton had to settle for a goalless draw against the Gunners.

After seven games, the Seagulls are in fifth place, having missed out on a chance to become joint-top with a win, while Arsenal are in ninth place.

With only a few minutes remaining, the Gunners were glad for Aaron Ramsdale's acrobatic clearing, which denied Neal Maupay a straightforward chance in front of goal.

They'll be hoping for good news on Saka now, though England will be more concerned about his situation right now.

The latest international window opens next week, with Arsenal only returning to action on October 18 at home against Crystal Palace.

Meanwhile, England has two World Cup qualifiers in October, against Andorra and Hungary, as they aim to consolidate their position atop Group I and, if other results go their way, clinch qualification.