Inter Milan May Not Win Seria An Ahead Of Juventus - This Is The League Table And Remaining Fixtures.

By DrPlatosocrates (self media writer) | 1 year ago

The Seria A league is gradually coming to an end, and it is becoming more interesting. Juventus who were seen as the favourites to win the league has drawn their last 2 matches, and it was only narrowly that they were able to do that. Atalanta football club almost beat them, but they were given 2 penalties to equalize, which Cristiano Ronaldo scored the 2 penalties. Also, they could not also win Sassuolo, and almost lost the match, but then again, they were lucky. As it stands now, they have all but lost the Seria A league to Inter Milan, who even have a game in hand, and easier fixtures ahead of them. Below is the Seria A league table. You will see the points difference between Juventus football club, also known as the Old ladies, and Inter Milan football club. 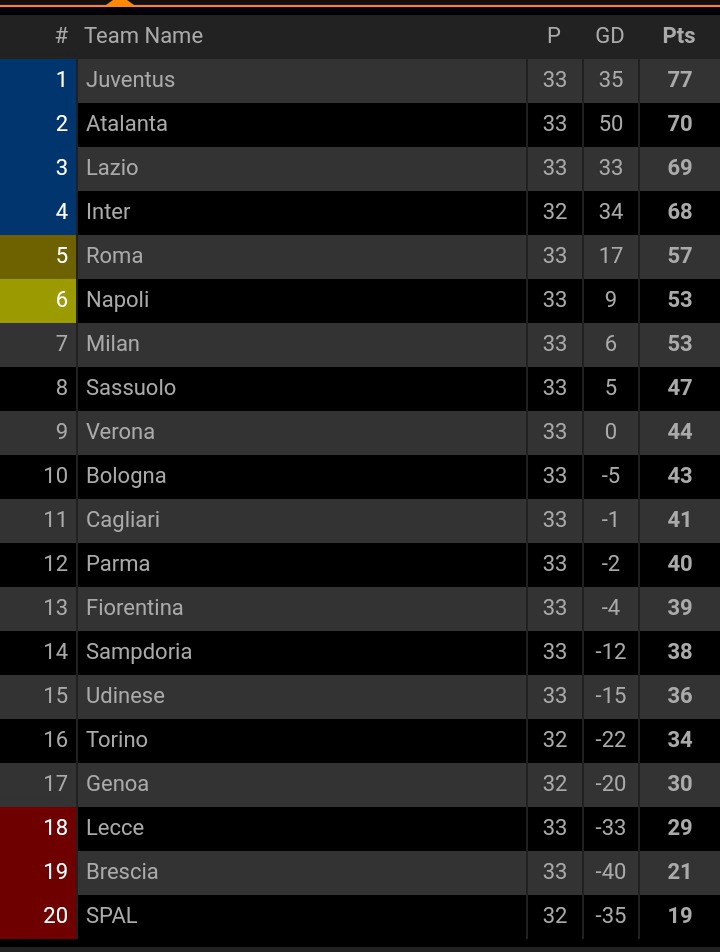 Inter Milan football club have a game in hand which they will most likely win, and the game is against SPAL football team, who have almost been relegated. They are sitting at the bottom of the league table, with a goal difference of minus 35. This is a game that Inter Milan football club will easily win ,and that will take them to 71 points, just 6 points below Juventus football club, and with 5 games remaining, they have easier road to thread, than juventus. Below is the remaining Seria A fixtures of Juventus Football club. 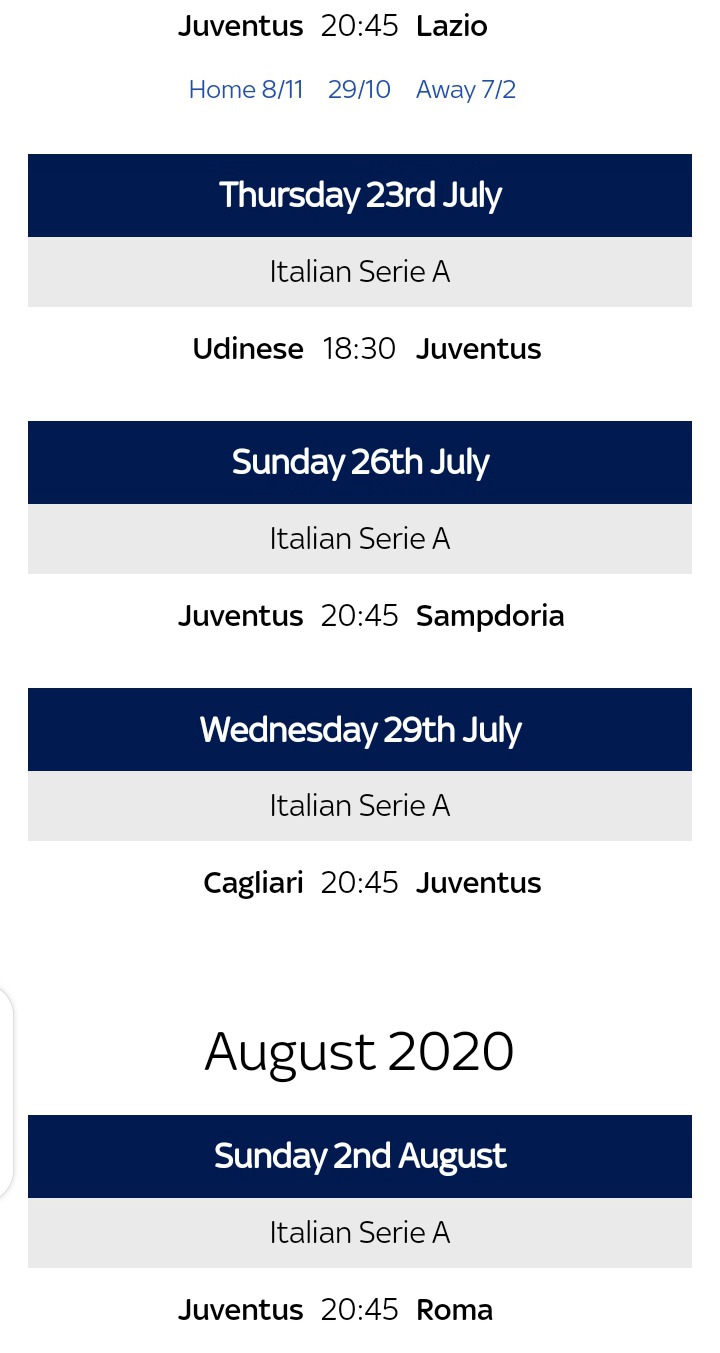 If you take a look at the remaining fixtures for Juventus football team, it's a very tough one for them. Their next game is against Lazio football club, who are also gunning for the league title. Their best result from that match will be a draw, but you and I know that Lazio will still win them. That means they have lost 3 points from a possible 15.

Also, they cannot win Udinese football club, it is always hard for them, and seeing the fact that they almost lost to Sassuolo football club,their best result in the match will be a draw.

Then, they will now meet Sampdoria football club who have nothing to loose, a draw will be all they want, in order to frustrate the defending champions, and the league toppers.

The match against Cagliari football club is a tough one, because Cagliari want to play European football next season, and that means that, they will play their best against Juventus. This means that the best result for Juventus football club will be a draw.

Then the final league match against Roma football club. Roma thinks that they have a shot at champions league football next season, an if not, they must qualify for Europa league, and that is why they must win the match.

So at the end of the day, Juventus football club might only get only 3 points from a possible 15, which will take their total points to 80 points, but it seems to be a smooth ride for Inter Milan. Below is a picture of their remaining matches. 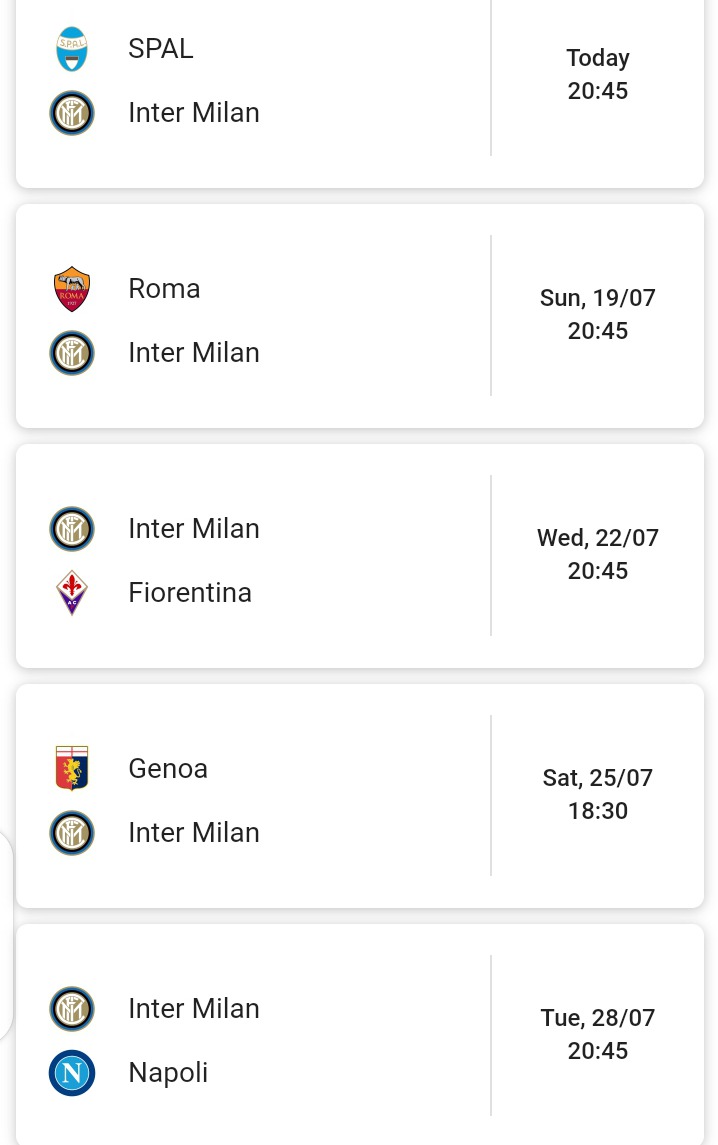 Inter Milan will easily win SPAL football club. They are playing at their best currently.

They will also win Roma, it is a walk into the Park for them.

So, out of a possible 18 points, inter milan football club will most likely be sure of 16 points, which will take their total points to 84 points, and make them win the league.

I hope you now see how Juventus will loose the league to inter Milan? If you have a contrary opinion, please share it with me in the comment section, leg us interact. You can also share and like this article. Please do follow me for more interesting articles.

Content created and supplied by: DrPlatosocrates (via Opera News )