By Oyiyemedia (self media writer) | 1 year ago 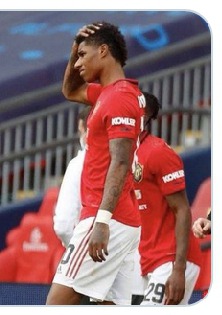 Manchester United: Marcus Rashford has his say on Manchester united lost to Chelsea at Wembley.

Manchester united were knocked out of the FA cup yesterday by the Chelsea Fc. Chelsea now booked a date for the final of FA cup against Arsenal. Following the lost, united and England young star, Marcus Rashford admitted that his side were poor last night at the Wembley. Rashford took to his twitter page to express his feelings over the defeat.

According to him, "there is no where to hide this morning. We just weren't good enough yesterday. I'm gutted. But we have to brush that off and prepare for two huge games this week. Your support is everything and we never take that for granted. We are going to need everyone of you behind us". The two sides have met four times this season out of which united won 3 and Chelsea won 1. This lost left united only in the league cup and the Europa league. They can now concentrate more on the two leagues to get the best of results. In the english league united sits fifth on the table leveling points and goals with Leicester city who sit fourth on the table, and a point behind Chelsea who sit third. More chances are also there for Manchester united to win the Europa league cup.