AFCON: The 3 players that are currently ahead of Iheanacho in the top scorers table

By SportsBible (self media writer) | 10 days ago 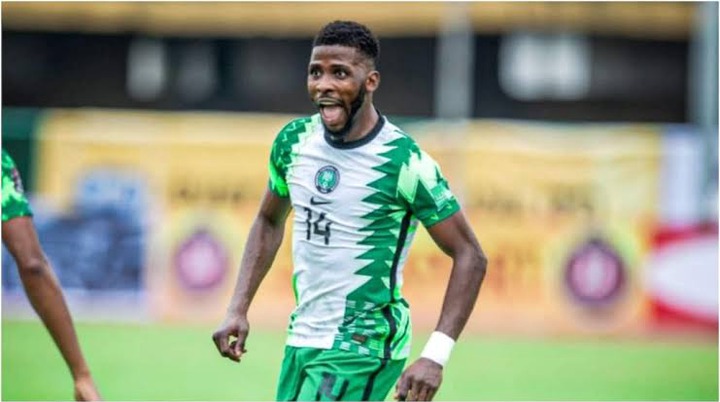 Kelechi Iheanacho scored a goal in Nigeria's first game against Egypt but he has some ground to make up if he is to win the golden boot at the end of the 2022 African Cup of Nations tournament that is currently taking place in Cameroon. With the Super Eagles set to take on Sudan in what will be their second group game on Saturday, we will be looking at the 3 players that are currently in a position to stop the Nigerian striker from getting his hands on the award.

At the moment, Aboubakar is the player Iheanacho must beat if he is to get his hands on the golden boot as the Cameroon striker has 4 goals so far and he's leading the race for the prestigious award. His first two goals at this tournament were against Burkina Faso while the last two were scored in the 4-1 win over Ethiopia.

With Cameroon sure of going through to the Round of 16 after 2 games, catching him or overtaking him might prove the be the most difficult for Iheanacho given that Cameroon is currently the best-attacking team in the tournament.

Ekambi who plays for Ligue 1 club Lyon is another player Iheanacho must catch up with to win the golden boot. The two goals the Cameroon winger scored were in the match against Ethiopia which they won 4-1. The fact that he does not play in the center forward position means it could be easier for the Nigerian striker to overtake him than Aboubakar.

Like Ekambi, Malawi's Gabadinho has scored two goals after his country's first two games. He is good in front of goal as the match against Zimbabwe in which he scored a brace was his first involvement in this tournament. However, with Malawi currently third in Group B and needing to beat Senegal in their final match to advance, Iheanacho should be able to overtake him.