By Godaik (self media writer) | 11 months ago

Nigeria international and high-scoring FC Minsk defender, Onome Ebi is one of a few veteran Super Falcons players that keep rolling back the years. 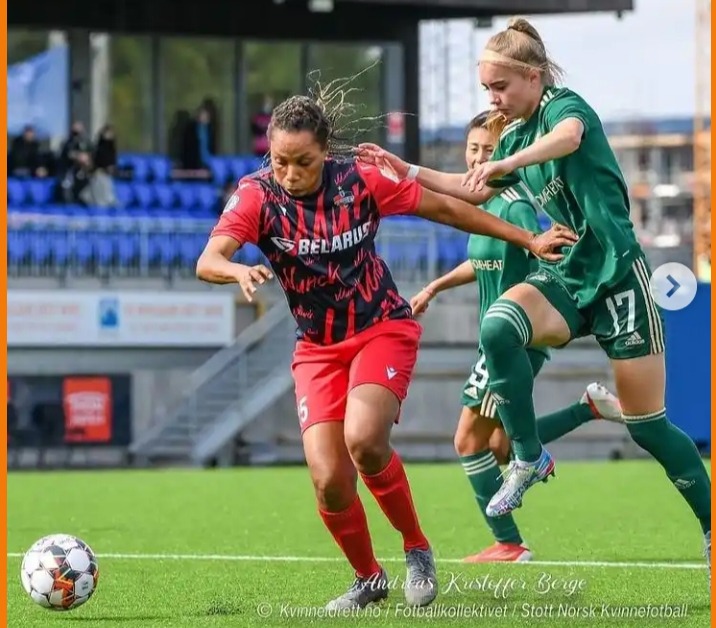 *Onome Ebi in action for FC Minsk against Celtic on Saturday night.

The 38-year-old who holds the record of the first African Woman to play in five World Cup finals, is looking to make her feat appearance at the 2023 edition in Australia and New Zealand at 40, which will see her become the first women to do so on the continent.

Her only absence from the team was occasioned by the outbreak of coronavirus , which aborted her stint with Chinese Women's Super League club, Henan Jianye, and consequently stayed back in Nigeria for several months before joining her Belarusian Premier League club side early this year.

Her inactivity also took a toll on her international career, as the former Omidiran Babes player suffered a three-year absence from the Super Falcons, having not turned out for the perennial African champions from 22 June 2019 to 17 June 2921, when she was called up by new team's handler, Randy Waldrum for the internation friendly 3-0 defeat to USA at Q2 Stadium Austin in Texas.

Despite the team going down to their American counterparts, Ebi clearly distinguished herself despite not having played active football for several months.

Despite her age, Ebi remains relevant in the Super Falcons, and without a shade of doubt will make the team to the Mundial in two year's time, to build upon the feat achieved at the 2019 edition in France.

Ebi's second spell at FC Minsk left so much encomiums in its wake, with coaches and team-mates showing her affection, and showering her with love and praise.

Ebi has started all 12 matches for her new club, with four goals to the good. On Saturday, she made a bold statement on the continent, spearheading her club's 3-2 extra time win over Celtic in a UEFA Women's Champions League game at Koteng Arena in Trondheim.

She expressed her delight in a post on her Instagram page shortly after delivering another stellar performance, uploading some pictures of the encounter.

"Thank you Lord for all .That feelings when coaches say Ebi 6th World Cup loading..... after a fantastic performance," stated Ebi, who is one of the most travelled Nigerian female players, having also laced boots for Bayelsa Queens, Piteå, Djurgården, Düvenciler Lisesispor, Ataşehir Belediyespor and Sunnanå.