Is The La Liga Failure By Messi and Barcelona The Straw That Breaks The Camel's Back?

By TheRabbi (self media writer) | 2 years ago 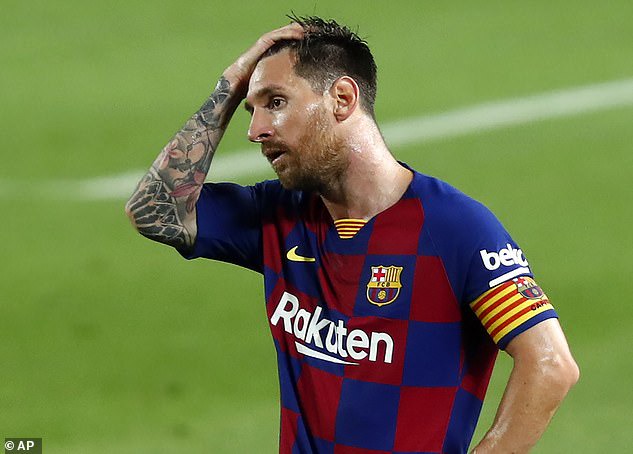 The Barcelona hierarchy should be getting ready for the exit or future loss of form due to age of their talented multiple award winning, all star player Lionel Messi. If they aren’t then they are in for a rude shock. Events of recent seasons have pointed to a grim future without the diminutive magician.

Barcelona, since the restart of the current La Liga season haven’t done much to put up a fight against eventual winners Real Madrid. The result on Wednesday at home against visitors, Osasuna highlights the fact that over reliance on the magic of Messi to carry the team is bound to hit a roadblock at some point.

The arrival of from Antoine Griezman from Atletico Madrid was supposed to bring succor to the already beleaguered. Well, his arrival hasn’t really gone according to plan, as it’s obvious that Griezman will require more than a season to settle in the team that has been built around Messi for countless seasons.

Hopefully, being a world class player, he should be able to come through in the future. Although, if the performances of recent high profile arrivals are anything to go by, that may seem like wishful thinking. Their performances have left a lot to be desired.

Philippe Coutinho’s arrival from Liverpool in 2018 was greeted with so much enthusiasm giving his records at the Mersyside outfit. The swashbuckling midfielder was pivotal to the revolution introduced by Jurgen Klopp at the time.

In just two years after Countinho was bought and if the rumours are to be believed, the Brazilian may well be on his way to either Newcastle United, that is if the takeover by the Saudi billionaires succeed, or Arsenal Football Club.

This isn’t what one would expect from a player who some years ago literally had the world at his feet when he decided to make the switch the Catalan club side.

Luis Suarez, another ex-Liverpool player, lately has had been battling with recurring injuries and isn’t getting any younger. At 33, his best years appear to be behind him. The injuries have seriously impeded his contribution to the team.

Suarez has scored 15 goals so far this season, the lowest since his arrival in the 2014/2015 season. He had consistently scored at least 20 goals per season in previous seasons.

All the effort of steering Barcelona to La Liga and Champions League glory rests on the shoulders of Messi. Messi has scored 23 goals and assisted 20 after 37 rounds of games in the La Liga.

To put this in proper context, Barcelona have scored 81 goals and conceded 38 so far and if we removed Messi’s contribution they will be left with zero goals difference as opposed to plus 43 which they currently have.

Wednesday night saw Barcelona with a man advantage lose to Osasuna, a team occupying the 11th position on the leagyue table. A 77th minute red card was issued to Osasuna’s Enric Gallego, the team still went ahead to win the game in the 94th minute.

It therefore didn’t come as any surprise when Messi took a jibe at the team’s performance and also at the coach Quique Setien when he said: “we are going to have to change a lot if we want to do something…”

Going by recent interviews, it still remains to be seen whether Merssi will sign a new contract with the club he’s been since he was a boy. Although it could also be a ploy on his part to negotiate favourable terms since he’s in the twilight of his career, despite the stats saying otherwise.

Whether he signs or not, it’s beyond obvious that Barcelona needs to act and act fast by recruiting suitable hands from the position of board members to players on the pitch and coaching staff to ensure they don’t fall into a rot. If this isn’t done, then they will be in for more heartache in the league in particular, and the Champions League in general.

Content created and supplied by: TheRabbi (via Opera News )