By TosinAmusan03 (self media writer) | 1 year ago

The club fine was retained but has reduced to £10 million. 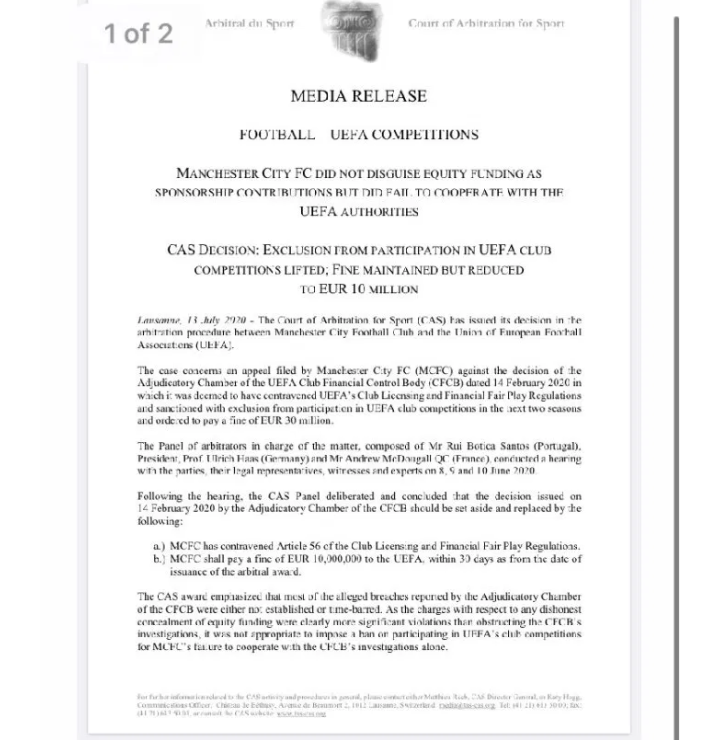 City said in a statement "The Club welcomes the implication of today's verdict as a validation of the cub's position and the body of evidence that it was able to present. The Club wishes to thank the panel members for their hearing and the due process that they maintained in the execution of the verdict.

UEFA Club Financial Control Body (CFCB) maintained that City had committed "serious breaches" of UEFA's FFP regulations "by overstating its sponsorship revenue in its accounts and in the break-even information submitted to UEFA between 2012 and 2016."

City strongly denied the charges and appealed the verdict at the Court of Arbitration For Sport - the highest court for settling Sport disputes.

The panel of three European Lawyers congregate by CAS stating its position on Monday, CAS said its Judgement "emphasised that most of the proved reported by the adjudicatory chamber of the CFCB were either not established or time prevented.

"UEFA said that the CAS Panel found that there was insufficient conclusive evidence to support all of the CFCB's conclusions in this specific case and that many of the alleged breaches were time-barred due to the five-year time period foreseen in the UEFA regulations.

"Over the last few years, financial fair play had played a significant role in protecting clubs and helping them become financially sustainable and UEFA and (ECA) European Club Association maintain its principles."

The verdict shows City, who are guaranteed to finish second in the Premier League this Season, will play in the 2020/ 2021 Champions League.

Content created and supplied by: TosinAmusan03 (via Opera News )