EPL: One Substitution Klopp Made That Paid Off For Him In Today's Crucial Game

By SportCorner (self media writer) | 9 days ago

Liverpool played out a disappointing 2-2 draw in their first crucial Premier League game of the season against newly promoted side, Fulham, on Saturday afternoon.

It wasn't the best performance from Jurgen Klopp's men, but the manager would be pleased with the outcome of the contest.

Liverpool started the game on a brilliant note as they dominated possession and created series of good chances in the opening stages.

However, their dominance count for nothing as Fulham managed to keep them out in the final third.

Before the half-hour mark, Diaz thought he had given the away team the lead, but his attempt was disallowed for offside.

Mitrovic's spectacular header gave Fulham a deserving lead in the first half. However, things took a different turn in the early stages of the second after Jurgen Klopp made a couple of substitions.

The German manager introduced Elliot and Nunez to give his team a different attacking shape. The decision to bring in Nunez paid off for Jurgen Klopp after the hour-mark as Nunez found the back of the net with a wonderful flick from close range.

Though, the equaliser didn't last long as Mitrovic managed to convert from the penalty spot five minutes later. Liverpool got back into the game, and it was Mohamed Salah that saved their blushes this time. 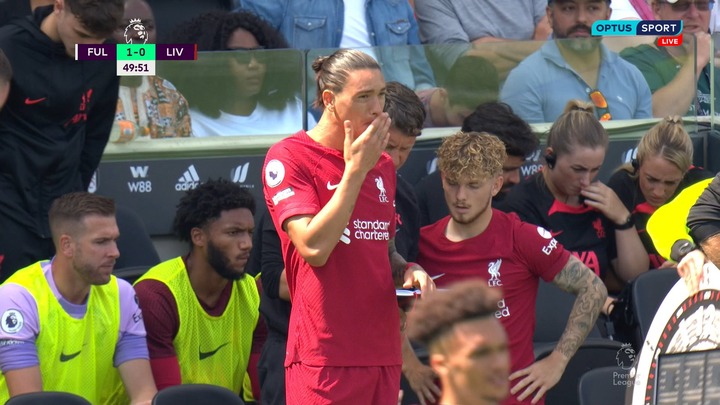 Content created and supplied by: SportCorner (via Opera News )