3 Most aggressive Liverpool players ever Here we will look at the most aggressive Liverpool players ever. As mentioned above, this will not be done based on their character and their playing style- but we will use stats such as red cards, tackles made, aerial duels etc to support our argument.

So here are the Top three most aggressive Liverpool players ever 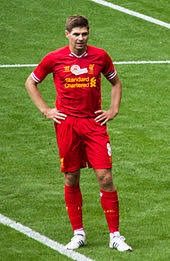 The Premier League is one of the fastest leagues in the world. In fact in terms of sheer pace, it is the fastest. The game carries on end to end. However, it does not just stop there. The players also battle intensely and the game is immensely physical.

The Premier League sees players battle out physical tussles and at a fast pace, when all these tackles and pushes fly in, there can be serious mistimings on these clashes.

In fact this is the primary reason, why Premier League teams end up with so many more red cards which are not intentional injury to an opponent but rather a serious case of mistiming the foul on the opposition.

However, it has seen players come out to toughen themselves up and wants to see a hard player. Here are three best players of Liverpool who we feel are the most aggressive.

The Liverpool midfielder was one of the club’s finest players ever. He was technically smart enough to play in midfield for decades and was always their most potent attacking threat. He could play through balls, both long and short. He could take shots from far off and score with them more often than not and he was more often than not at the base of every set piece.

However, that did not stop Gerrard from doing the duties by playing the dirty side of the game. He would get as involved as anyone on the pitch. He was a rock in midfield who could sit back and play and screen the defence. He loved a crunching tackle, he loves to stop opponents from going through and using his physicality he could be a dangerous player to stop or get past.

Another Argentine player who shone really well in the tough world of the Premier League. Masceranho later went on to become a central defender and correctly so as his role of central defensive midfield in Liverpool saw him primarily defend and screen the backline.

He was a tough fighter who would get in the mess of the fight and not afraid of coming out of it looking ugly. He could fight anyone on the pitch irrespective of their size and loved to time a tackle to perfection. He was always one step ahead in reading moves of opponents. Another thing he was a master mind at was making tactical fouls to stop opponent players from creating chances to score against Liverpool.

He would deliberately pick up yellow and red cards to stop his team from conceding goals by getting physical and making it dirty. He did so on multiple occasions and was always a constant threat in terms of helping Liverpool keep a clean sheet.

It was no surprise that Liverpool did not want to lose him. He however, was a brilliant prospect for Barcelona who had seen him succeed in the rough and tough world of Premier League and come out a champion.

The Liverpool vice=captain was a one man club. He was known for his loyalty to Liverpool and played really well for a long time. He was their mainstay at defence and played in multiple positions like on right back, left back and centre back.

He scored infamoulsy seven own goals but moving those aside, he was a rock at the back for Liverpool. He loved a physical tussle and wanted to fight all day long. He was the Captain America of Liverpool who would just never lie down.

Carragher knew how to get into the crunch of a fight. He would come out leaving the opponent worse off and even if he did not, he would not hesitate for a second going in again with the same enthusiasm for his club.

"Everything I see is you, I don't want any substitute" -Erica Nlewedim affirms

Socrates: The Life and Experiences that Influenced The Ancient Father of Philosophy

Ladies, Update Your Wardrobe With These 40 Classy Ankara Outfits