After Rashford scored, See where he ranks on the EPL Golden Boot chart

By Marcini. (self meida writer) | 1 months 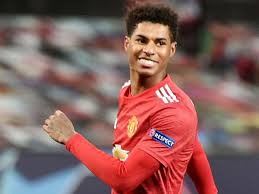 Man United beat Brighton And Hove Albion while Tottenham Hotspur Drew Against Newcastle United. Victory For Man United tightens their grip in second place and see them close the gap on Man City.

However, After Bruno Fernandes and Harry Kane found the back of the net, see how the EPL Golden glove looks like.

Harry Kane leads the race for the Premier League golden boot after he found the back of the net twice against Newcastle United. He has nineteen goals to his name. Mohammed Salah sits in second place despite finding the back of the net against Arsenal. The Egyptian has eighteen goals to his name. Bruno Fernandes is in third place after finding the back of the net against in United's Victory Over Brighton and Hove Albion. Patrick Bamford and Dominic Calvert-Lewin are tied on fourteen goals each in fourth and fifth place respectively. Son Heung Min is in sixth place with thirteen goals to his name while Jamie Vardy is in Seventh place with twelve goals to his name. Gundogan is currently in eight Position with twelve goals. Ollie Watkins and Lacazette are tied on eleven goals each in ninth and tenth position respectively. Wilson is occupying the eleventh Position while Marcus Rashford is occupying the twelfth position. Sterling and Mahrez are tied on nine goals each.

Here are more information and beautiful photos of Alexx Ekubo's wife to be, Fancy Acholonu

Check Out Reactions After American Rapper Lost A Wine Bid Of $175,000