By MasterWriter (self media writer) | 2 years ago

The Catalan giants hosted 11th place Osasuna to a Laliga fixture on their home ground (Camp Nou) on Thursday the 16th of July 2020. Prior to this match, the Quiqe Setienled side were gunning for a miraculous comeback to winning the league, after they had fallen four points behind leaders Real Madrid.

Barcelona entered the fixture without their ace striker Antoine Griezmann who sustained an injury last weekend and may fail to feature in the remaining matches of the season. Luis Suarez also was benched for whatever reason the coach had in mind, leaving Ansu Fati and Braithwaite to deputize on their behalf. 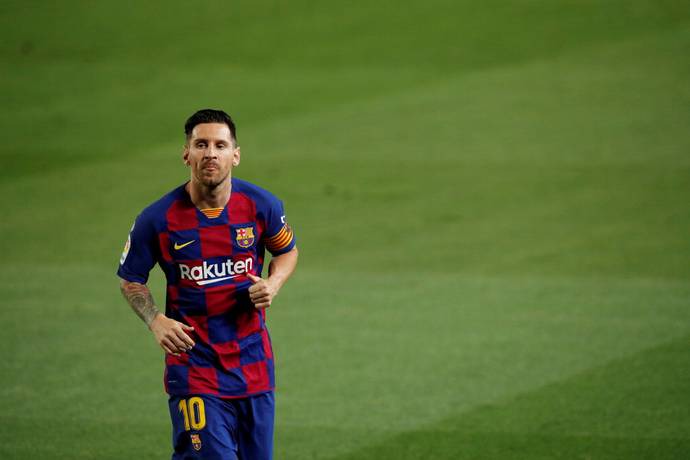 However, in the 15th minute away side went to shock the giants when they scored through Jose Arnaiz, after he sent a right footed shot into the net from a cross from teammate Pervis Estupiñán. There is no other heartbreak as painful as this one.

Messi almost scored a free kick in the 22nd minute, but the crossbar came to the rescue of the visitors while Barcelona were safe. Also, just before halftime the visitors almost gifted Barcelona an own goal but the clearance which was headed goal-wards missed the net.

In the second half, Barcelona started very violently in attack and almost had a goal in the first minute, when Messi released a through pass to Braithwaite. The striker converted his chance nicely, but the linesman ruled it off for offside.

Messi won an equalizer for Barcelona in the 63rd minute, when he bent a free kick that was given for a foul on Luis Suarez into the net, to level the scores and restore Barcelona's hope for title contention.

However, the Catalan giants still fell to a shocking 2-1 defeat after their visitors received a red card in the 78th minute as Lenglet pass was intercepted and a counter was scored by Osasuna's Torres, shattering the hopes of the Barcelona side in winning their silverware.

A devastating match to watch in the view of Barcelona faithfuls and Quiqe Setien's job is surely doubted next season.

Content created and supplied by: MasterWriter (via Opera News )