By Arewahausa (self media writer) | 2 years ago 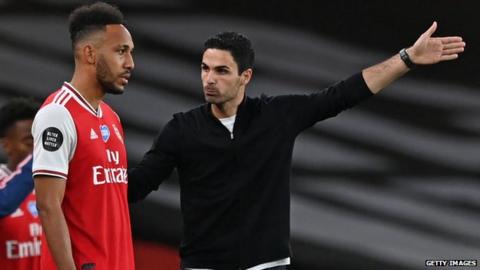 Mikel Arteta is "unsure whether" he will get the money to develop Arsenal's players so they can challenge their opponents in football.

The Gunners beat Liverpool 2-1 on Wednesday to win this year's Premier League, but Arsenal have a long way to go in qualifying for next year's Champions League.

Arsenal are ninth on the table with 53 points, three points behind sixth-placed Wolverhampton.

The coach was asked if he would get the money to buy players next year? "I don't know," he said in an interview with Sky Sports.

He added: "You need to strengthen the team and professional players, it's not an idol. We need to develop a team with the best and the best players to compete in big games. "

Arsenal spent more than 13 135m last season, including the most expensive player in the club, who took Nicholas Pepe for 72 72m and Kieran Tierney for 25 25m.

Other acquisitions include David Luiz, Gabriel Martinelli and William Saliba - who has moved to the Emirates on loan from Saint-Etienne.

However, despite failing to make the cut, Arsenal failed to make the top four in the Premier League this season and in November the Gunners sacked Unai Emery.

Content created and supplied by: Arewahausa (via Opera News )