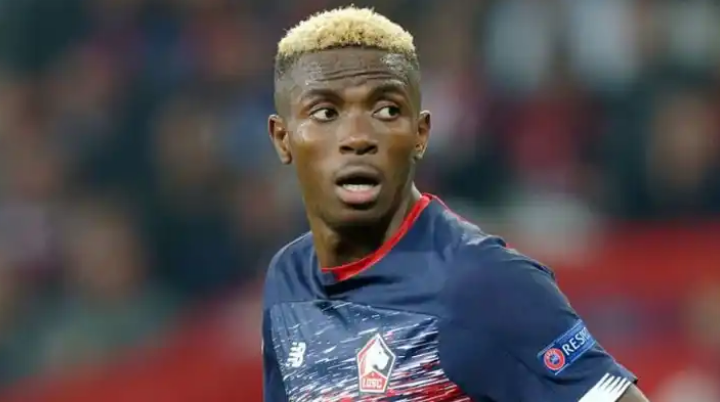 The Nigerian is on the brink of a big-money move, and it could be a great piece of business for whoever lands him

Victor Osimhen has come a long way from the young boy who used to sell water in the Lagos streets and was forced to scavenge through rubbish dumps to find football boots to wear.

Napoli are still favourites and set to splash out €81 million on the Lille forward (though Liverpool could well be circling too), he is set to be one of the most expensive footballers of the summer transfer window as well as the costliest African in the history of the game.

With 13 goals and five assists in his debut campaign in one of Europe’s big five leagues, Osimhen, who has a FC Rating of 76, was one of the breakthrough talents of the 2019-20 season.

He quickly set about making a name for himself in France, matching a tireless attitude with a keen eye for goal. By netting six times in his first 700 minutes of Ligue 1 football, he made an express start that has only ever been bettered by Zlatan Ibrahimovic and Neymar – two genuine superstars of the game. His rate would barely dip before the coronavirus pandemic brought an early halt to play in France.

Given the financial implications posed by the coronavirus crisis, that Napoli believe the Nigeria international to be worth his club’s lofty asking price is a huge vote of confidence in a 21-year-old with relatively little experience at the highest level of the game.

Although the deal was expected to be done more rapidly, Osimhen made a change of agent midway through negotiations, forcing matters to be thrashed out once again and briefly piquing the interest of Premier League clubs who felt it may yet be possible to change the mind of the young forward, who won the Marc-Vivien Foe Award, given to the best African player in Ligue 1 each season.

But it is to Napoli where he will go – with Lille president Gerard Lopez insistent that he will be a star in Serie A.

“If he goes there, he’ll be their superstar,” Lopez told La Voix du Nord earlier this month. “To have Naples at your feet, that must be quite something in the life of a footballer. Victor has this strength to perform under pressure.” 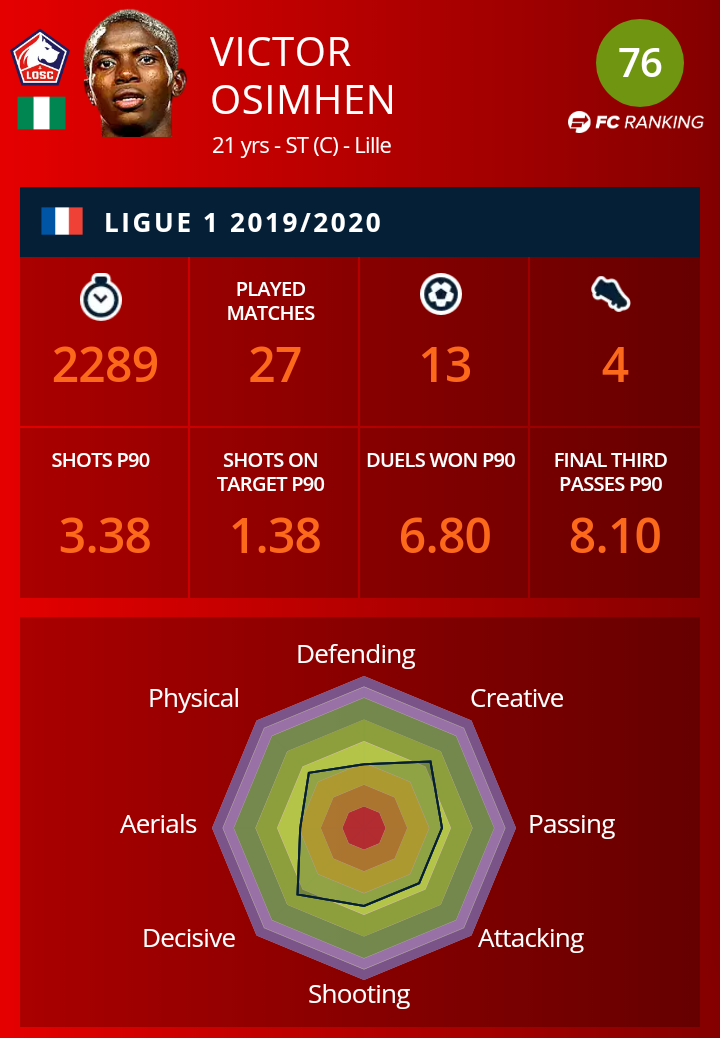 Lille are a side that have grown accustomed to selling their big offensive talent in recent years. Last summer, they saw both Raphael Leao and Nicolas Pepe depart, the latter to Arsenal for an €80m fee that is set to be symbolically eclipsed by Osimhen, whose rapid turnover from a player bought from Charleroi for €12m has further vindicated the transfer policy of the club from northern France.

Such a price tag invariably draws comparisons with players in a similar bracket, and Lille’s instance that Napoli surpass the price paid by Arsenal for Pepe – even turning down the opportunity to recruit Adam Ounas as part of the deal – has led the pair to be contrasted in some quarters.

“The comparison is a positive one, it’s an honour for me, but it ends there,” Osimhen said as far back as September. “I have great respect for what he did here. Many think I am replacing him. He scored great goals, but I am here with my own qualities. We have different profiles.”

Indeed, the analysis of the up-and-coming attacker is correct: the price and the return of goals may be similar, but in truth, they are different players with different strengths.

Osimhen was not even signed for Lille with the intention of replacing Pepe and he never filled the same wide role that his predecessor from the Ivory Coast did. Instead, he played as a central forward, a position that the Arsenal man had previously flopped in when Marcelo Bielsa persisted in fielding him as a No.9 during an ill-fated but short-lived stay at Stade Pierre-Mauroy.

Although both were the focal point of Lille’s attacking play, statistics highlight the ways in which the pair differ. During his final season in Ligue 1, Pepe was demonstrably more creative than Osimhen, laying on 11 assists and created 17 big chances in total – roughly one every two matches – while showing his direct nature by completing 2.8 dribbles every 90 minutes.

Osimhen, meanwhile, significantly lags in these categories. He has just four decisive passes to his name, created a big chance roughly once every six games and completed dribbles at less than a quarter of Pepe’s rate. 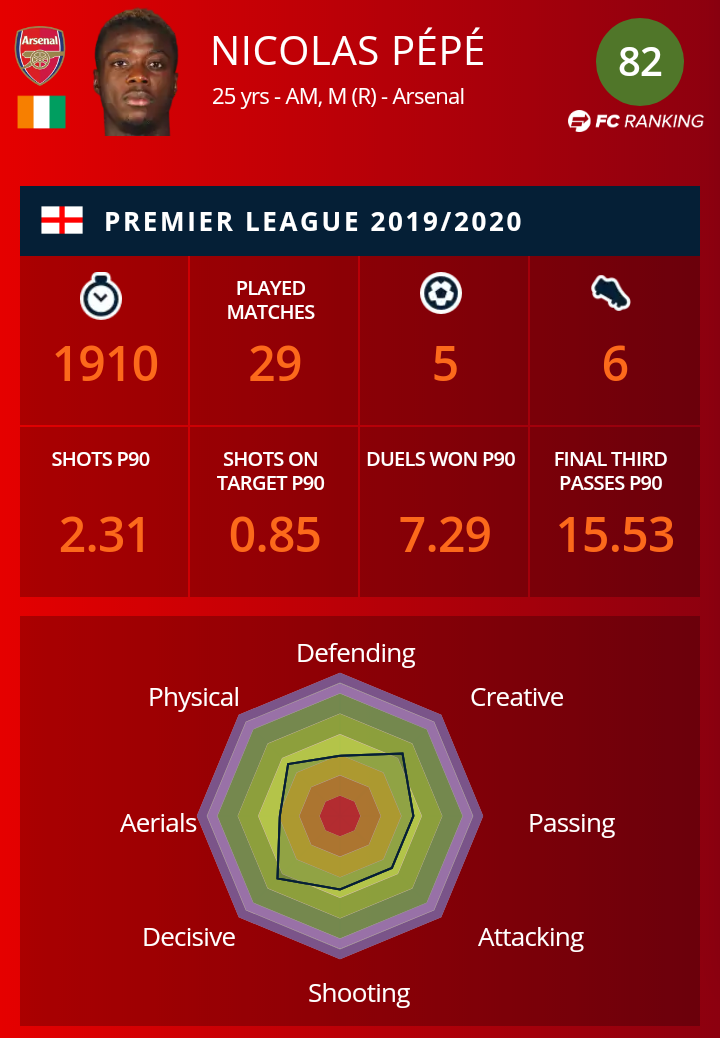 Where the Nigeria international, however, does score more favourably is around the penalty box. Take penalties out of the equation and both players notched 11 Ligue 1 goals in their respective campaigns – but Osimhen did so in 11 fewer appearances. Additionally, he offered more shots per 90 (though fewer on target) and touches in the box.

But if Osimhen is not the new Pepe, could he become the new Didier Drogba – the Chelsea icon who led the Blues to the Champions League title of 2012?

“He’s all the qualities of a modern attacker,” Nicolas Penneteau, who played with Osimhen during his phenomenally successful one-year spell with Charleroi, explained to RMC. “He’s quick, he jumps well, he’s strong in the challenge, good with the ball and he likes to get in behind defences. He’ll erase the little imperfections in his play, he’s a phenomenon.”

Certainly, there is something of style of the ex-Marseille man about Osimhen, though he lacks the snarling aggressiveness that Drogba used to his benefit and has not shown himself to possess the world-class aerial ability of the Ivorian, but key elements such as off-the-ball intelligence and a desire to give his all in every match are evident.

He may only be 21 – an age at which Drogba had not even tasted top-flight football – but he gives the impression of a player seeking to make up for lost time. Two seasons with Wolfsburg saw him accumulate only 363 minutes of first-team football, leaving him frustrated and eager to make the most of every minute on the field.

But this hunger for success stems from his background, which saw him lose his mother early in life, sell bottles of water at the Lagos roadside and overcome a bout of malaria, which hampered trials at Club Brugge and Zulte Waregem. “It was survival,” he told France Football of his experiences scavenging football boots in a dump. “Sometimes you found yourself with a right-footed Nike boot then you’d have to look for the other foot… Finally you find a left boot and it’s a Reebok!

“Part of my life has been a struggle to survive. But that's what made me all I am today. Each event created my personality.”

Since leaving Germany, things have moved very quickly, with success following success. Goals against Chelsea and Valencia in the Champions League provide further evidence that he is ready to elevate his status in the game and Napoli – as one of the traditionally more attacking Serie A outfits – should give him the platform to do so.

He may not be Pepe or even quite Drogba, but Osimhen has the tools in his locker to become the greatest African forward since the heyday of the Ivorian great finished close to a decade ago.