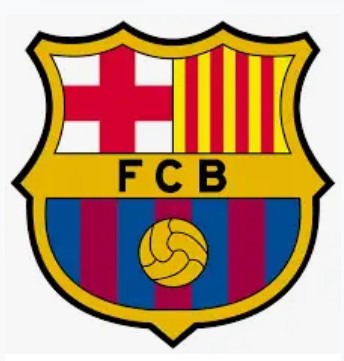 Not only is St George the patron saint of England, but he is also a significant figure throughout many regions of Spain. In Catalonia, for example, he shares the same mythology that he does in England.

The story reads that St George is the dragon-slaying moral crusader who, in short, is God’s man on earth.

FC Barcelona opts to have the cross on its crest to tie the club to its heritage which allows a continued connection with its narrative and its supporters.

That said narrative propels the club as a valiant vanquisher of evil and promotes the strong moral force the club believes it is.

During the period of Franco's dictatorship, amid worries of a rebellion within the country, mothers were banned from naming their children Jordi.

In 1974, while Franco was still in power, then Barcelona head coach Johan Cruyff proclaimed his love for the club and city by naming his son Jordi. Due to the rules in place by the Spanish dictator, his wife had to fly to the Netherlands to give birth.

SAD: British Actress Is Dead, See The Films She Acted In & Her Pics That Will Remind You Of Her(pics

Dear Guys, Don't Ever Tell A Woman These 4 Things Of Your Life No Matter The Love

FFK's Ex-wife, Precious Visits Ada Jesus In The Hospital, Read What She Said

After A Man Evicted The Family He Helped Because They Were Ungrateful, See How People Reacted