By Newslove (self media writer) | 1 year ago

Liverpool secured a comfortable win against Leeds United in what was a thrilling game of football at Elling Road earlier today.

Jorgen Klopp would be really pleased with the performance of his players especially in the second half of the encounter.

Liverpool didn't start the game well as Leeds United dominated possession in the early stages of the Show.

However, it was Liverpool who scored the breakthrough goal in the 20th minute courtesy of Mohammed Salah.

Liverpool improved their performance in the second half as they created more chances. Brazilian midfielder, Fabinho, doubled Liverpool's lead in the 50th minute after a superb run into the box.

Sadio Mane scored Liverpool's third goal in the 92nd minute to open his goal scoring account for the season.

Talented youngster, Harvey Elliot got a serious injury in the second half and that is the only major concern for Jorgen Klopp ahead of Liverpool's next Premier League game.

Salah's goal in the 20th minute was his 100th Premier League goal for Liverpool. That's such a great mark to reach and Salah will definitely go down as one of the best strikers that has ever played at Anfield.

Salah's goal against Leeds United was also his third Premier League goal of the season. It seems like he's one of the real contenders for the PL Golden Boot this season.

Though, we have other talented strikers in the Premier League who could give him a tough fight for that prestigious individual accolade.

Cristiano Ronaldo and Romelu Lukaku both scored a brace each for their clubs during the week and it's easy to say they are also in line for the Golden Boot award. 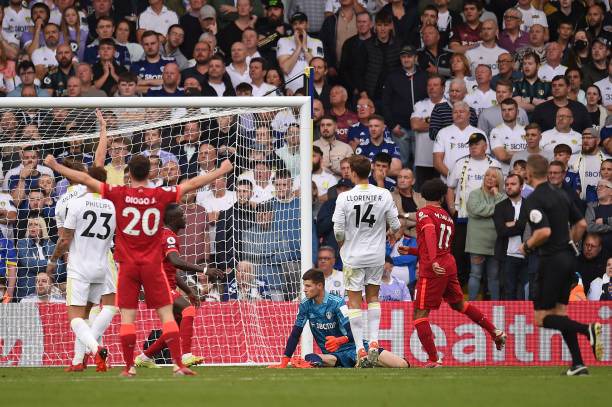 Do you think Salah has what it takes to win the Golden Boot award this season? Drop your comments and let's see what you think.