By Lizzysport (self meida writer) | 7 months 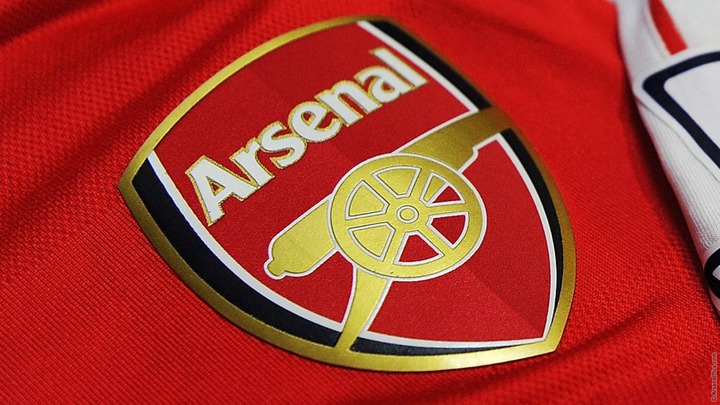 Arsenal Club officially send message to their fans in Nigeria over the EndSARS protest to show much concern over killing of innocent people across the country.

Its has been cleared to everyone through the images and video clips that went viral throughout the whole world via Social Media, that the Nigerian youth are fighting for their fundamental human right.

Arsenal sent the below message through their official Twitter page today. 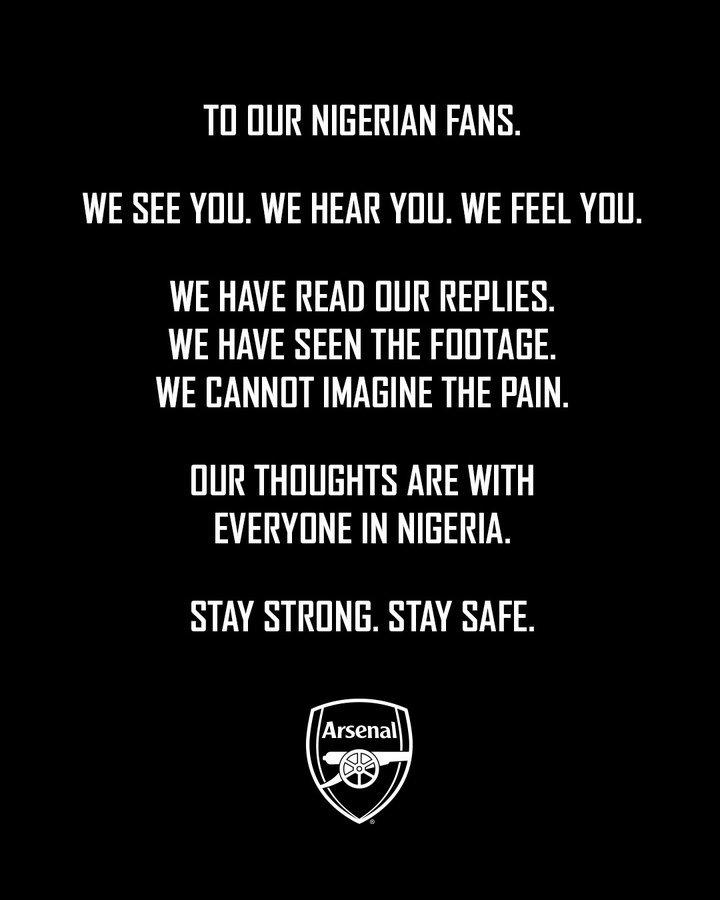 I’m disappointed at @Arsenal y’all even turned your back at us, where thousands of your fans were been killed. I wonder who you’re posting for because Nigeria has if not the largest Arsenal fan base in the world.

What else did u expect pls, they should open Arsenal for us to take guns and fight just because there Name is Arsenal, abi... Oga let give them a break no be dem be our problem

Mtweew...Arsenal shd grant visa to all their fans in Nigeria b4 u know they helped u ....send this anger to the top ppl not Arsenal pls ....

Arsenal this is a very good message. However why the silence with the Muslims in China? Why was Ozil not supported ? I'm actually more disappointed in you now.

Great message but what about the Uighur genocide in China?? I thought you distance yourselves from political issues? Care to explain why this is different? The world is silent about a genocide, by distancing yourselves you’re letting China win.

Look I don’t want to be that guy and what you guys are doing is good for Nigeria, but what about ozil and the Muslims in China? Why did you ignore that?

But when Özil tried to do something like this y'all pushed him out, standing up only when it doesn't hurt financially.

Why do Arsenal fans attack the club so much? I just can't understand!

Every positive post about players, about signings all I see is Ozil this, Gunnasaurus that etc.

When do we begin to support, appreciate and critique not just pour negativity

Why is it ok for club to have a political view, and players who express their view, are cast aside for the season?!

Please we're Arsenal fans not Ozil,Arsenal has been before Ozil and it'll remain even without him,stop bringing Ozil into every Arsenal matter,he's indeed my favorite player but I remain an Arsenal, thanks for your act of humanity #Arsenal OneLove

fans...Please understand that Mesut Ozil's comments could have triggered a religious war...While the situation of Nigeria has nothing to do with tribes, religion and whatsoever...Its merely a fight for our rights which the government have turned bloody.

Imagine the govt. using the military to:

To shoot protesters who were singing the National anthem.

To break the law by shooting civilians who were holding the national flag (treason).

Dear @Arsenal fans, this is a fight against bad Governance. Leave Ozil out of this.

I see how people can say it looks like double standards but re-read the statement again & you’ll see how carefully worded it is. They don’t use the hashtag for a reason. They say pick your battles wisely & seeing as this message doesn’t call out any government or religion...Man shrugging

Pppl n how complicated they can get, police r kilin d youths n all you can say is referring dis piece 2 Ozil’s article. I honestly support ozil n whatever he stands with, I also stand with the Muslims in china This is a fight for humanity and we have to tackle one before d other.

Are you taking the piss? I hope nigeria solves its issues. My thoughts are with Nigeria... But when Ozil talks about the suffering of the muslims in China you suddenly 'Dont get invloved in politics' ???

they have spoken about BLM because it was trendy to so

Now they are doing same with this matter

In actual they don't give a fu*k about anyone.

Its all business for all these clubs

But when it involves Muslims, you don't see the footage then ey.... And no I'm not taking anything away from what's happening in Nigeria but Arsenal are picking and choosing to support things which are trending and ignoring what is happening in China and shunned Ozil for it

Content created and supplied by: Lizzysport (via Opera News )

Fatherhood is more important to me than music - Wizkid

Wife, Cook This Local Dish For Your Husband And He Will Love You More

"If I Sand You"- Adekunle Gold tells A Fan

How A Woman Warns Her Family Members Not To Attend Her Burial, Invites 15 Friends