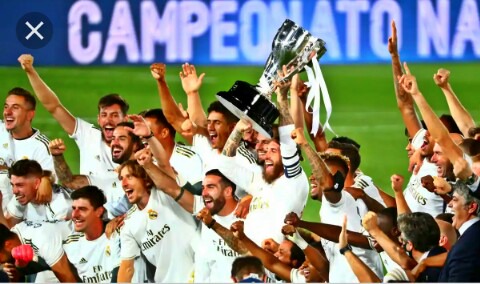 Chelsea are all but set to receive a huge cash bonus from Real Madrid after Eden Hazard helped them to win the 2019/20 LaLiga Title. Hazard joined the Spanish Giant last summer on a £91m deal after spending seven season at Chelsea.

Included in the deal which took him to the Spanish Capital, various bonuses were included to be paid to the London Club. Such clauses included is if Madrid wins the Laliga or qualified for the Champions League. Now Real Madrid have succeeded on that. Frank Lampard could benefit with a bonus about £18m after Zidane's side scoped the Santander. Real Madrid are already sure of their Champions league place next season even before they won Villarreal by 2-1 with Karim Benzema scoring both goals. Madrid qualification for the champions league is said to worth £14m to Chelsea while the club 34th Laliga Crown could net £18m to Chelsea.

This development is a now a motivation for Chelsea who needs cash in view of the current squad overhaul and rebuild.

Chelsea who has spent to complete the signings of Timo Werner and Hakim Ziyech are also in need of a midfielder left back, Central Back and possibly a new goalkeeper. It is also known that there will be further bonuses to Chelsea if Hazard wins the Champions league with Madrid. In total Chelsea could receive £130m from Real Madrid if all clauses are met.

Hazard played 16 times for Madrid in the Laliga scoring once and making six assists. He has also made five appearances in the Champions league.