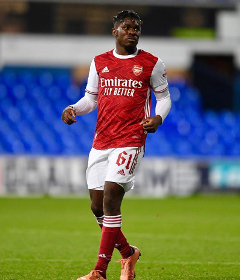 understands that Nigerian-born youngster Tim Akinola will not make his first team debut for Arsenal when they take on Leicester City in a Carabao Cup clash at the King Power Stadium on Wednesday night.

The central midfielder was not in the Gunners traveling party to the East Midlands, effectively ruling him out of the contest.

Arsenal plan to ease him into the U23 team before he is considered for a professional debut.

Akinola is in the frame to feature for Arsenal in the London derby against Tottenham Hotspur in the Premier League 2 this weekend.

The 19-year-old has played three games for the youth teams since his celebrated move to the Emirates Stadium, coming off the bench against Ipswich Town and Southampton B in the EFL Trophy and Premier League 2 respectively, before making his full debut in a 2-2 draw vs Brighton & Hove five days ago.

Akinola signed a two-year deal with Arsenal in the summer, ending his association with Huddersfield Town in the process.

Content created and supplied by: Ladi69 (via Opera News )