VIDEO: Arteta Admits That Man City Is The Best Team In Europe After Sending Them Packing From FA Cup

Arsenal again had a reason to celebrate last night in what seemed like a consolation victory over Manchester City to qualify for the FA Cup finals.

The Gunners who had a sloppy start in EPL since the return of football after the coronavirus break made sure they proved that they were still the boss of the FA Cup after Aubameyang double strike sent Man City packing. Still being fresh from beating Liverpool, Arteta couldn't hold his joy after the defeat during his interview after the match. He praised Aubameyang for his wonderful performance after acknowledging his opponent's team as the best in Europe in terms of the way they play. He also expressed concern about their fans not being able to enjoy the moment with them as they could have loved watching the team play.

In his own words from an after-match interview he said: 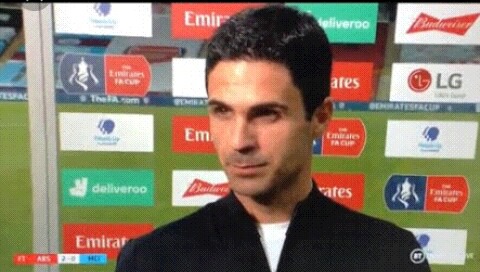 "Absolutely that's (a gritty performance) what you need against this team. You have to try to give the best when you have the opportunities make the most of them (as we had) because when you have the defence put everybody on the line. It really went organized you know how it is for me its [Manchester City] the best team in Europe the way they play 'positionally,' but we did our job," he added.

"There's a great chemistry between them and they really believe in what we are trying to do and you can sense that. And they themselves they've done it, I went on the pitch and congratulations for them."

In conclusion he praised Aubameyang for his performance and also admitted that they went away with few mistakes from gaining possession in the first half of the game.

Arsenal will now face either Chelsea or Manchester United in the finals on Saturday to determine who will lift the prestigious trophy.

Do you agree that Man City is actually the best team in Europe in terms of possession?