The 36-year-old return to the starting XI came as no surprise after Solskjaer was chastised for leaving him on the bench in Manchester United's last match against Everton.

During the international break, the Portuguese were in blistering form for Portugal, scoring four goals in two games.

Cristiano had a quiet first half, save for one golden chance from close range, but he must be in the team if United are to turn their troubled form around and mount a title challenge.

If it wasn't obvious to the Norwegian coach before the Everton game, it will be now, even if he did blank against the Foxes. 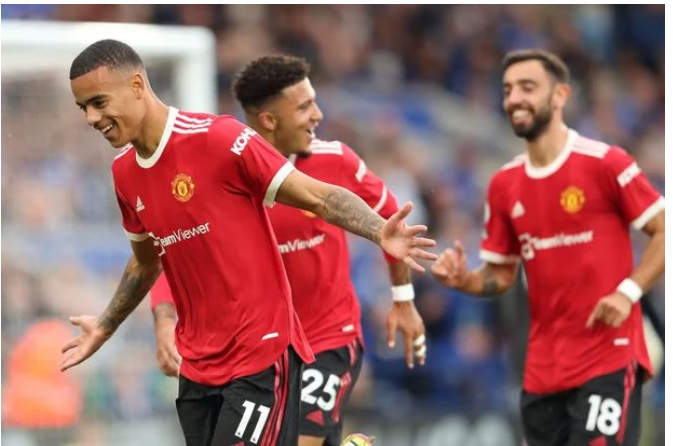 Competition for a spot in Ole Gunnar front three is fierce, but Mason is quickly emerging as United's main man this season, alongside Cristiano.

The British striker hadn't scored since the smash-and-grab win over Wolverhampton at the end of August, after scoring three goals in three premier league games prior to Ronaldo's return.

Even without goals, he's been one of United's most dangerous players during their difficult run in recent weeks.

And he can now move on after ending his mini-drought against the Foxes in spectacular fashion.

Mason Greenwood gave Manchester the lead after 19 minutes with a thunderbolt, but the lead was short-lived as Tielemans drew the hosts level with a spectacular first-time strike into the top left-hand corner.

Soyuncu's goal in the 78th minute sparked an immediate response from Manchester United, as Rashford equalized. Patson Daka added a fourth goal for Leicester in the dying seconds of the game, before Vardy scored a late goal for the Leicester

The Red Devils lost ground at the top of the Premier League after falling to a 4-2 defeat against Leicester City, adding to the pressure on United's under-fire coach Solskjaer.