Check out All The Jerseys Barcelona Have Used Since 1989 Till Date; Which One Is Your Favourite?

Barcelona is arguably one of the best teams as far as the European Leagues are concerned, and in fact, the club is named among the best clubs in the world, not even mentioning the fact that it's the giant of La Liga as a league. Barcelona holds the biggest and best records in La Liga, and apart from Real Madrid, no club in the league has been able to win the League's championship from Barcelona.

As it is known with football, some things don't last forever, that is, they are changed as time goes on. Usually, players are transferred from one club to another, managers are changed and so on; and one of the things that also change is the club's jersey. Over the years, different industries, companies or individuals have determined to sponsor different clubs, and thus, the moment there's a new sponsor, the name on the jersey will be changed, and in fact, with the same sponsor, a club might decide to change its jersey.

Thus, starting from when Barcelona started as a club up till date, a picture has been seen comprising all the jerseys the club has ever used, and then, we can see that Barcelona is a legendary team that has weathered the storm as far as football is concerned. 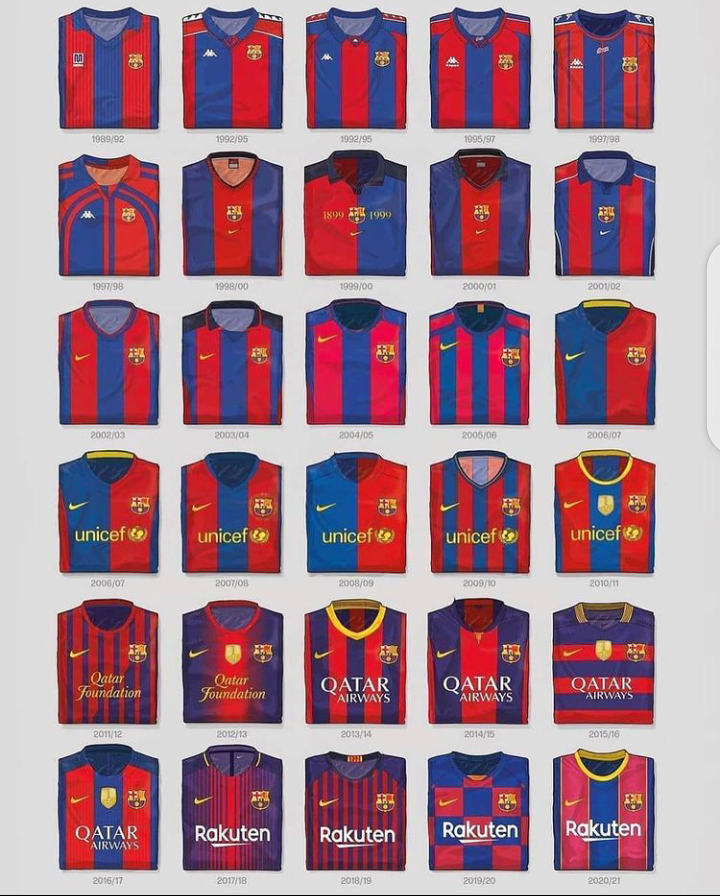 Obviously, the jersey isn't changed yearly, but in different occasions; which means the same jersey would have been repeated for years before it's changed. Some times, it will be the stripes, or the shades of the colours of the jersey and so on.

Thus, as a fan of Barcelona, which of these jerseys was/is your favourite. And if you aren't a Barcelona fan, which of the jersey do you think is better for the team?

Reno Omokri debunks report of having baby with UK lover

Check Out These Beautiful Fashion Outfits For Slim Ladies

Symptoms Of Prostate Cancer Every Man Should Be Aware Of

There Is More To Why I Wanted To Abort My Pregnancy -Yoruba Actress, Lizzy Anjorin Reveals