By Chuksogbu (self media writer) | 21 days ago

As our beloved country Nigeria just celebrated her 61st Independence Anniversary a few days back, I think it's just normal that we take a look at Nigeria's most impressive achievements In football.

When you talk about Nigeria's most impressive achievement in football their may not necessarily be a general consensus on that because the nation had won lots of laurels in the beautiful game but is yet to win the grandest of them all, which of course is the FIFA World Cup.

Five times in history, the country became champions of the world at the Under-17 FIFA World Cup. Unfortunately, not everyone would be enthusiastic about celebrating those moments in 1985, 1993, and 2007, 2013 and 2015 because it's only a cadet Championship , it is only normal to see the achievement of the Dream Team at Atlanta 1996 as Nigeria's biggest achievement in global football, it is the biggest platform that earned Nigeria a place amongst the top football Nations globally and also marks as arguably the greatest moments in Nigerian sports history.

Glittering on a giant wall inside the Atlanta Olympic stadium, embossed in gold letters, are the names of 18 Nigerian football players who put up some of the most spectacular and most entertaining football displays of any Olympics in history, played against two of the strongest teams in the world at the time, Argentina and Brazil, and came out victorious in grandest style.

Nigeria’s football Gold medal at the 1996 Olympic Games is definitely one of the two undisputed greatest moments in the history of Nigerian sports. The players include Victor Ikpeba, Mobi Okparaku, Tijani Babangida, Daniel Amokachi, Emmanuel Amuneke, Jay Jay Okocha, Kanu Nwankwo,…..and so on.

As we celebrate our 61st Independence Anniversary, it's nice that we remember this guy's. 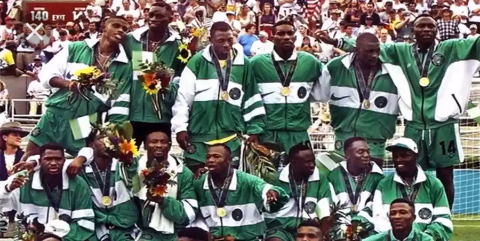