Over the years, we have seen a bunch of incredible body transformations in WWE, and the pro-wrestling industry as a whole. A WWE Superstar needs to keep their physique in check at all times, to make sure that they look their part while being on live TV with millions of fans watching them perform every single week.

In addition to being good on the mic, boasting a great physique is always a plus and is bound to aid the Superstar in catching eyeballs of the higher-ups in the company, possibly leading to a push. Ever since the COVID-19 pandemic put the world to a halt, a number of Superstars have made it a point to utilize the extra time in their hands in a better way and make some serious changes to their physique.

In the following slideshow, we will be taking a look at 5 Superstars, both current and former, who have undergone some incredible body transformations during the COVID-19 crisis.

He once used to be nothing more than an enhancement talent on the WWE roster. Today, Heath Slater has A LOT to look forward to, mere hours after making his way to Impact Wrestling at last night's Slammiversary PPV. Slater was one of several WWE Superstars who were released by the company, back in April. The talent cuts had come in light of the global COVID-19 pandemic, and Slater's decade-long run on the main roster came to an end.

Recently, Slater appeared on WWE RAW and was looking absolutely ripped. The former 3MB member looked like he has been spending a lot of time lifting weights. He has also been regularly posting pictures of himself on his official Instagram handle, that shows how much he has changed physically. The generic heel who didn't do much of note while being a part of Nexus in 2010-11, looks completely different now, if the photos above are any indication.

2019 was the year of Mustafa Ali, as the former 205 Live Superstar made his way to WWE SmackDown and immediately began turning eyes on the Blue brand. His sudden injury on the road to WrestleMania was a big downer for him. His spot was given to Kofi Kingston, who ran with it and eventually won the WWE title at WrestleMania. On the road to WrestleMania 36 this year, WWE had been teasing the arrival of a mysterious entity dubbed as The SmackDown Hacker.

It was reported at the time that Ali was going to be revealed as the hacker, but nothing came of it and WWE seems to have canceled the storyline. Nevertheless, Ali has been making the most of his time away from the weekly WWE action. He last wrestled a match in February, in a winning effort against Drew Gulak. Mere days before WrestleMania, Ali posted a picture on his social media, showing off his improved physique. He added that it took his trainer just four weeks to get him in the best shape of his life.

On the road to WWE WrestleMania 36, AJ Styles got into a feud with The Undertaker. The rivalry culminated at The Show of Shows with Styles being buried alive by The Deadman when all was said and done. At one point during the match, Luke Gallows and Karl Anderson interfered, but it didn't take long for The Phenom to dispose of them. This was the last appearance of the duo in WWE, and they were soon released by the company.

Gallows and Anderson spent weeks on end teasing their next move. The Good Brothers finally appeared at Impact Wrestling's Slammiversary PPV. A short while before Gallows made his way to Impact Wrestling, Karl Anderson took to Instagram and posted a brand new picture of his tag team partner, who was boasting an impressive physique. Gallows and Anderson had their moments during their multi-year WWE stint, most notably when they were a part of The O.C. along with AJ Styles. It remains to be seen what's next for them now that they have arrived in Impact Wrestling. 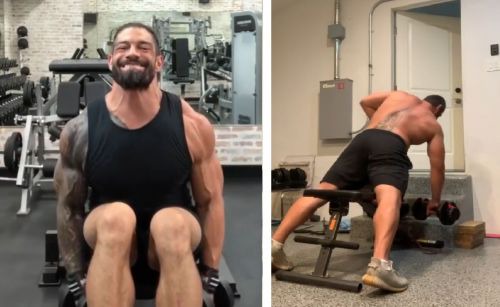 The final few months of Rusev's WWE stint weren't something that he would want to cherish. Rusev's real-life partner Lana got together with Bobby Lashley last year, and the duo declared their love for each other soon after. For the next few months, both Lashley and Lana engaged in a feud with Rusev, with Liv Morgan later getting involved in the hullabaloo. Lashley got the upper hand over Rusev for the majority of the feud, which wasn't something that the fans were expecting from this angle.

Rusev  was released by WWE in April, and he has been active on his Twitch account ever since. Playing videogames and chatting with fans isn't the only thing that Rusev is currently doing though.  Lana , who is back with Rusev again, recently gave us a  quick look  at Rusev's physical transformation. Rusev looks quite shredded in the clip and makes us wonder whether he is preparing to make a move to another promotion very soon. Rusev now goes by the moniker of Miro and hasn't updated the fans yet on what's in store for him in the near future, in regards to his wrestling career.

The 'Big Dog' Roman Reigns hasn't stepped foot inside the squared circle since his dark match with King Corbin on an episode of WWE SmackDown, way back in February. Reigns decided against putting himself at risk during the COVID-19 pandemic, and there's no word as to when he will be making a return to the ring.

Reigns recently posted an album on his official Instagram handle, and he is looking absolutely jacked! He can be seen working out in the gym in a video included in the album. Reigns' cousin The Rock, who has one of the most impressive physiques in Hollywood, reacted to the transformation and stated that he is proud of Reigns. The Rock also had a bit of amusing advice for his cousin. Reigns was scheduled to take on WWE Hall of Famer Goldberg at WrestleMania 36, with the latter's Universal title on the line. He pulled out of the match mere days before WWE WrestleMania, and was replaced with Braun Strowman, who went on to defeat Goldberg to win his first Universal title.